A new term for a new consumer generation

Dean Anthony Gratton discusses the implications of our virtual communities and how global connectedness is changing the way we live.

We are all connected.

The need for consumers to sustain a permanent connection has been driven by a deep-seated need, fueled by peers, the furor of social media and just simply a trend to have immediate access to anything at anytime, anywhere.  As consumers, we all crave a perpetual connection to the Internet.  Personally, I am at a total loss if I’m deprived of my daily IP-fix.  I think I can confidently speculate that we all have a deep-seated need to be connected.  The availability of Wi-Fi in bars, shops, restaurants and so on, along with favorable data packages offered by both fixed and cellular providers has allowed us all to sustain that all-important ‘IP-fix’. 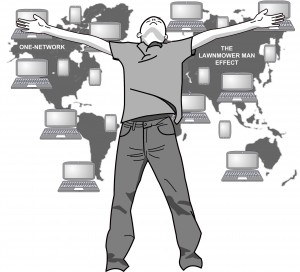 Figure 1: The Lawnmower Man Effect typifies the consumers’ ability to traverse digital systems across the globe, all Captained from their personal area network through pervasive WAN technologies.

I have penned the Lawnmower Man Effect (LME) as a definition; a term that classifies the ability afforded to a new generation of consumers who seek to have that permanent connection to anything, at anytime, anywhere.  A generation of consumers who are nowadays armed with a myriad of electronic devices that have an inherent ability to connect.  In Figure 1, I conceptualize the LME supposition where we, as individuals, have this unique ability to virtually cross the globe in an instant.  I derived the term from the 1992 film starring Jeff Fahey and Pierce Brosnan, The Lawnmower Man.  In the film we witness Brosnan conducting numerous experiments on Fahey using virtual reality in an attempt to increase his intelligence but, of course, this is not the focus of my definition here.  Rather, despite the character’s malevolent motivation, Fahey physically becomes holistic within the wider area network, having an ability to traverse computers, technology and telephony systems and a range of other digital applications and services across the globe.  Essentially, the Lawnmower Man Effect typifies the modern consumers’ ability to likewise traverse similar systems across the globe, whether sat at a computer, waiting for a train or cheering at a sporting event; hopefully void of the malevolence portrayed in the movie and all Captained from their personal area network.  What’s more, LME is a supposition that consumers, irrespective of their location and despite their conceptual boundaries, are all connected to this one-network – if you like, one IP-enabled global community, where each consumer has every opportunity to remain connected, no matter where they are in the world.  Nowadays, immediacy of content and access, and perhaps social media is also responsible for this need to be ever-present.  In a society that often demands, “We want it now” it seems we can no-longer wait for that all important email; tweet, Facebook or Google+ message.  Indeed, there are some who are eager to oust their colleague to become Mayor of a popular establishment on Foursquare.  The vibrant shift in communication through social media has given rise to a new revolution of fresh knowledge and curation – all supported by a culture through virtual communities mapped across our virtual space.  No matter where new technology leads us, we are holistically connected in our virtual community, connecting with other like-minded people across the global, indirectly supported by the Lawnmower Man Effect.

About the Author: Dean Anthony Gratton

Dean Anthony Gratton is the author of The Handbook of Personal Area Networking Technologies and Protocols (2013). He has worked extensively within the wireless communica...