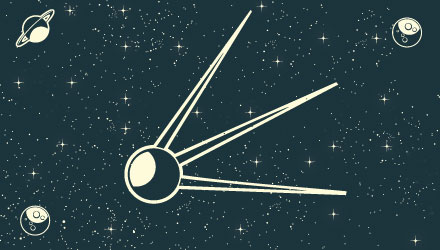 Publicist Rachel E. prepares for what may just be the Year of Comets.

When I was five years old and every other girl in my kindergarten class wanted to grow up to be a princess, an actress, or a figure skater (it was a Winter Olympics year), I wanted to be an astronomer. And after an entire childhood of countless nights glued to a cheap backyard telescope, a stellar attendance record at the Griffith Observatory’s planetarium shows, and dozens of books on stars, planets, asteroids, and black holes, I’m pretty sure I would have climbed the ranks at NASA, if I’d just been able to pass that pesky obstacle known as “high school physics.”

Even today, I can’t write an equation to save my life, but I still love space. With Comet PANSTARRS passing through the northern hemisphere this month, I can hardly contain my excitement—living in New York City limits my stargazing options considerably, but that hasn’t stopped me from scaling the fire escape to the roof my apartment building to scan the evening horizon for a dim burst of light and its barely perceptible tail.

The summer I was nine and learned about comets at Astro Camp, my instructor explained them as huge chunks of ice, gas, and dust hurtling through space. She made her own comet by packing dirt and dry ice into a compact ball and then launching it across the lawn of the Los Angeles Natural History Museum. Tearing through the air, with a fog-like gas trailing after it, her terrestrial comet was magnificent.

No images of me making my own comet survive, so I rely on this Google Image search result to convey how cool it was.

I was thrilled to make my own comet, which I preserved carefully in a plastic sandwich bag. I still recall the look of horror on my mother’s face when she picked me up that afternoon and I announced I’d need to store it in our freezer. But the next morning, I was disappointed to find only a bloated bag of slushy dirt.

I think the discovery that my comet had vanished overnight was the lesson. Comets are fantastic yet fleeting, never to be relied on, only briefly visible from Earth as they streak through the sky. The few months, weeks, or even days we can see a comet in the sky, we’re watching an object that may be as old as the universe itself race past our solar system onward, tracing a path that will take it through galaxies lightyears from our own. PANSTARRS will not pass by Earth again for over 100,000 years. You don’t even have to do the math to appreciate that.

So I’m not living my childhood dream of searching for deep space objects through high-powered telescopes. But as I wait for PANSTARRS on my roof—looking for an object that reminds me of the depth of the universe, its past and its future, and our own infinitesimally small place in it—that seems pretty close. While I wait for the next comet to pass through (ISON will be here in November), I get to work on Cambridge University Press’ amateur astronomy list. And that seems pretty close, too.

Comet PANSTARRS will be most clearly visible in the northern hemisphere on Sunday, March 10. Look toward the western horizon in the evening, and don’t forget your camera! Submit your photos of PANSTARRS to Cambridge’s photo contest to win $125 worth of astronomy titles. Guidelines are here.