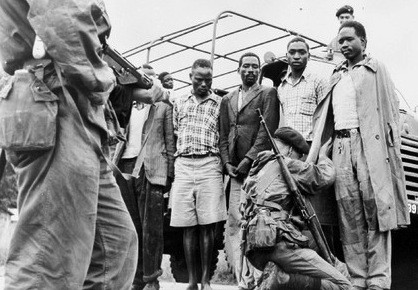 Huw Bennett, author of Fighting the Mau Mau, tells us about being inspired to write the book, as well as the practical and moral dilemmas in doing so...

What inspired you to write Fighting The Mau Mau?

My interest originated in studying how armies fought against partisans and guerrillas. Exploring the German experience in the Second World War, the Americans in Vietnam and France’s war in Algeria, it was clear that a central strategic problem for armies was how to find the “enemy” amongst the civilian population. Most writings suggest that armies struggle to make the distinction and end up harming civilians. But when I started the project, the consensus view held that the British were able to overcome this problem and use violence more discriminatingly. The idea that the British Army fought insurgents by using minimum force and winning hearts and minds was widespread. But I discovered that remarkably little detailed historical research had been conducted on Britain’s use of force in practice, so I sought out a compelling case study. The archives on the Kenya Emergency offered rich insights into how Britain’s army has treated civilians during its counter-insurgency wars.

What was the greatest challenge in writing it?

There were two enduring challenges during the researching and writing of the book. One was practical and the other moral. In practical terms, it was difficult to obtain evidence of government and military brutality because much of the evidence was deliberately concealed. Researching in a wide range of archives and making extensive use of the Freedom of Information Act was essential. The new sources discovered in the Hanslope Archive, released because of a case at the High Court in London, also offered valuable new material. The moral challenge was to maintain my belief in the importance and universality of human rights, without allowing the analysis to turn into polemic. Writing about torture, rape, murder and other abuses requires a certain detachment which can be difficult to achieve.

I like to write at home in my study when nobody else is around, preferably in the evening and at night. I am easily distracted so need to distance myself from the television and internet. Access to coffee is also essential!

What was the most surprising/alarming fact you discovered in the research process?

With a project such as this, there were many occasions when alarming facts cropped up. The most surprising was when I discovered the full transcript of the McLean Court of Inquiry, which was held in late 1953. The Inquiry called 147 witnesses from all army units then deployed in Kenya, to examine military conduct and discipline. Witnesses were encouraged to talk openly and thus the document says a great deal about how soldiers understood what they were doing to fight the Mau Mau at this time.

Do you have any recommendations for further reading?

What do you have planned next?

I have just started working on a book project called “Preserving British Security in a World After Empire, 1957-82”. The book asks how British policy makers planned for the post-imperial world, and how efforts were made to secure security relationships with the former colonies, in order to sustain British influence as a global power. I also continue to research British counter-insurgency, and am writing articles on Kenya, Aden and Northern Ireland.

Huw Bennett is author of Fighting the Mau Mau (out now). He is a Lecturer in Defence Studies at King’s College London, teaching at the British Joint Services Command and Staff College.