The Real Legacy of the Lincoln-Douglas Debates

The birth of the presidential debate...or is it?

Many mistakenly believe that the famous Lincoln-Douglas debates of 1858 were the ancestors of the modern Presidential debate. They were not. In 1858 Douglas, the leading Democrat in Congress and an internationally known figure, ran for re-election to the U.S. Senate while Lincoln, unknown outside Illinois, managed to secure that state’s Republican nomination for the Senate and proceeded to stalk Douglas on the campaign trail until he relented and agreed to a series of seven three-hour debates.

What few people realize is that two years later, when Lincoln, thanks mainly to his performance in those debates, became the Republican Party candidate for the Presidency, he did not debate his rival; indeed, he shunned public appearances altogether and refused even to issue a statement laying out his views. His silence had been in fact typical of Presidential candidates since Washington. There was a code against campaigning that had been observed by nearly every Presidential candidate since the beginning of the republic and that Lincoln and two other candidates in 1860 followed. Only Stephen Douglas challenged this code. He undertook what became the prototype of the modern whistle-stop Presidential campaign.

In 1860 both Lincoln and Douglas, the Democrat, were hated in the South, where extremists threatened to take their states out of the Union if the Republican candidate, whose party platform unambiguously opposed slavery, were to win the Presidency. Others hated Douglas for his opposition to an imposition of slavery on federal territory unless the people there wanted it. 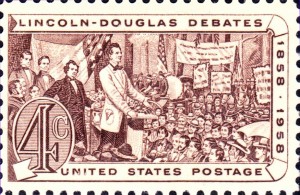 Despite appeals to reassure the South that he would not touch slavery in states where it existed, Lincoln stayed home and stayed silent throughout the campaign. In contrast Douglas took his belief in local self-determination across the country, including two trips through the South despite threats against him. Most often with his beautiful young wife at his side, Douglas spent 160 days campaigning in more than 150 towns in twenty-three of the thirty-three states. Several hundred thousand persons saw and (if they could) heard him. He was a national celebrity who was cheered even in the heart of antislavery New England and the pro-slavery South.

Douglas’s Presidential campaign was unprecedented. He continued even after he knew he would not win. He made his second foray into the South in order to persuade its people not to secede from the Union. His consistency was as impressive as his purpose and effort. While he was a master democratic politician who did his homework and knew what rhetorical buttons to press in every locale, he did not trim his message. He believed in local self-government, in the right of local majorities, whether in states or federal territories, to decide domestic issues for themselves – including the question of slavery.

Lincoln of course won the election, kept silent until he was inaugurated four months later, and came into office facing a country that had already split apart. Douglas became a confidante of sorts and important ally in trying to restore the Union. Their relationship in1861 was fascinating because for the first time in the quarter-century they had known each other their roles were now reversed. But in June 1861 Douglas died at age 48, exhausted physically from his grueling campaign, which also straitened his estate.

Modern Presidential campaigns have turned candidates into national celebrities who have been able to parlay their fame into wealth. Douglas’s campaign cost him physically and financially. Why he did it, why he truly believed his message, and why he sacrificed his health and wealth for politics is a story about American democracy as it used to be.