Stephen A. Douglas, the Antebellum Press, and Media Today

Martin H. Quitt reveals how the antebellum media influenced Stephen A Douglas' campaign for the presidency and what the press' behavior over 150 years ago spells for candidates today.

In the decade before the Civil War the press usually was so partisan that individual papers often published stories planted by favored candidates against their opposition. In comparison to newspapers then, mainstream media today are generally models of impartiality. 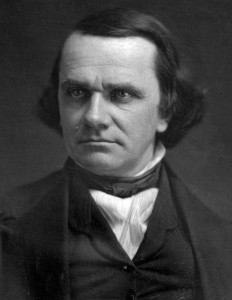 Despite the intense partisanship, the antebellum press granted politicians a degree of privacy that those today can only envy. Two facets of Stephen Douglas’s private life that both tabloids and broadsheets would investigate today were, in one instance, wholly ignored, and in the other only superficially touched upon. Indeed, what makes the biographer’s task so challenging is the need to unearth from archival sources information that the press then failed to dig up.

The first was his proclivity for sitting on men’s laps. He may well have given up the practice after entering Congress, for all of the documentation is from Illinois politicians or lawyers who observed him doing it there. He was not only short but weighed barely 100 pounds in his twenties, when he rose rapidly to prominence in his adopted state. Later he may have abandoned the habit more because of his expanding girth than because he thought it unseemly. I’ve not found a newspaper report about his lap sitting – only memoirs by contemporaries who found it worthy of note without imputing a pejorative meaning to it. His physicality with men dates at least from his youth when he pleaded in his copybook with a schoolboy whom he loved.

Why did he sit on men’s laps and why was it noteworthy but not revealed in newspapers? An explanation for his behavior is offered in my book, Stephen A. Douglas and Antebellum Democracy. He sat on men’s laps as a sign of his being at one with them, on his complete comfort with the male democracy of his time. Our media and many of us would find such conduct so unbecoming that it would be career-ending. In Antebellum Illinois, however, lap sitting enhanced Douglas’s appeal to the men who sat on juries and who went to the polls.

A second activity should have been more controversial and would have received unrelenting investigative scrutiny today. From the moment his first father-in-law, a North Carolina slave-owner, died in 1848, Douglas became enmeshed in a Mississippi plantation that his wife inherited. He consistently claimed an arm’s length distance from the property, despite a deeper involvement over time. On rare occasions when his personal entanglement with slavery was brought forward, he protested vehemently and self-righteously. He was not hypocritical, but self-deceptive.

During his campaign for the Senate in 1858, his rival never mentioned Douglas’s personal stake in slavery. Lincoln’s silence had more to do with the political code and his own wife’s background than his limited knowledge of Douglas’s Mississippi operation. Despite press coverage that made their debates that year famous, Douglas’s involvement was not an issue until a few weeks before the election when a pro-Lincoln Chicago paper charged that slaves on his plantation were ill-treated.

The press around the country focused less on the truth or falsehood of the charge and more on the alleged source of the story! What no newspaper did was send a reporter to the plantation to investigate conditions. In fact most of the newspaper accounts repeated the same error of locating the plantation in Louisiana. The full story can be told today because of a newly discovered letter that Douglas wrote to his second wife after he personally visited the Mississippi plantation in 1859 in order to check on the conditions of his slaves.