Chief Justice Marshall and the judiciary system in early America

For more exclusive features, check out our Book Club.

It is difficult to image two men whose dispositions were more at odds than Burr and Jefferson—unless it was Jefferson and his cousin John Marshall. By the time of the Burr trial, personality differences had become deep-seated and long-running ideological disagreements over the meaning of the American Revolution and the new Constitution. When Federalist President John Adams appointed Marshall Chief Justice in 1801, with the understanding that Marshall would curb newly elected President Jefferson’s self- proclaimed radicalism, he set the stage for a Constitution-defining war between the two Virginians. The famous case of Marbury v. Madison (1803) was one battle in that war.  When Jefferson took personal charge of the prosecution of Burr, the Richmond trial turned out to be another. Jefferson was determined to “eradicate the spirit of Marshallism;” Marshall was determined to consolidate the independence of the federal judiciary, which he had begun to do in Marbury. 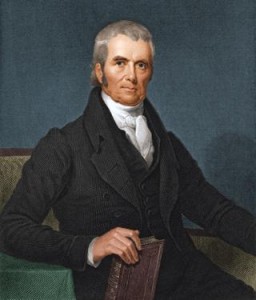 What complicated Marshall’s position in the Richmond trial and what made the trial so revealing of his character and his legal acumen was the fact—thanks to the circuit-riding responsibilities imposed on Supreme Court justices by the Judiciary Act of 1789—that he was sitting as a trial judge. On the Supreme Court, decision-making was a collaborative process; as a trial judge in Richmond, Marshall had little help from his fellow justices and no place to hide from his critics. Running verbatim reports of the trial in the national press subjected his decisions and his conduct of the trial to unrelenting scrutiny—by the president and by public opinion fuelled by the partisan press hooted on by Jefferson. Before the trial ended, the president was as determined to get Marshall impeached as he was to get Burr convicted. And since the president’s party controlled both houses of Congress, the possibility of impeachment was a real one. Had Jefferson succeeded in removing Marshall, the victory in Marbury would have been nullified and the future of the federal judiciary would surely have been in serious jeopardy. Marshall understood the grave issues and also the dangerous political pitfalls.

Not surprisingly when the jury acquitted Burr, Jefferson and the partisan press accused Marshall of bending the law for political reasons. And in truth, Marshall did occasionally stumble. One costly blunder, which he acknowledged and deeply regretted, was to attend a party given by Burr’s chief counsel, with Burr in attendance. Critics have also argued that he allowed both sides to ramble on much too long about points not germane to the case. And there is no doubt that Marshall occasionally let his hostility to Jefferson show.

On the great legal and constitutional issues before him, however—the due process rights of criminal defendants and the constitutional meaning of treason—Marshall rose above the political chaos swirling around him. The old Chief may not have been a perfect hero, but against the odds, he put American law on a foundation consonant with the values of the Founders—and with the moderates in both parties, including the party of Jefferson.