A Q&A with Professor Ross Taylor

We have been fortunate to have the opportunity of talking to author and Professor Stuart Ross Taylor about his career and his new book ‘Destiny or Chance Revisited’ (out now). 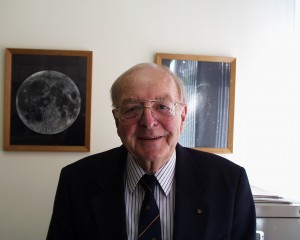 What sparked your initial interest in the cosmos?

Initially I became interested in the geological history of the Earth, then moved on to work on samples from the Moon. This led me on to consider our solar system and then to place it and ourselves in a wider view of the universe.

How did the idea for the book come about?

I felt it was necessary to make a sober assessment of the wide variety of exoplanets now being discovered and to see how they relate to our own eight planets.

Reading the hundreds of scientific papers on exoplanets was like trying to get a drink from a fire hose.

How is this book special or different from your previous book?

Because it has a much broader perspective on our place in the universe.

This book represents an attempt to place the planets both here and elsewhere in a cosmic perspective. It also discusses the setting of Homo sapiens in the universe.

Anyone interested in our place in the universe. A wide section of the general public should find Chapter 7 on Perspectives interesting.

I find working on a book or paper to be the most satisfying part.

In your illustrious career in planetary sciences, what is your greatest accomplishment?

It was carrying out the first analysis of the first sample returned from the Moon, July 28, 1969.

What is the one book you would recommend reading (fiction or non-fiction)?

Making predictions, especially about the future, is too difficult for me to attempt.

Stuart Ross Taylor is a trace element geologist and an Emeritus Professor at the Australian National University. His research has covered wide-ranging topics involving trace element geochemistry, from the composition and evolution of the Moon, to tektites and the continental crust of the Earth. He has a DSc from the University of Oxford, is a Foreign Member of the US National Academy of Sciences and has received the Goldschmidt Medal of the Geochemical Society, the Leonard Medal of the Meteoritical Society and the Bucher Medal of the American Geophysical Union. Professor Taylor is the author of 240 scientific papers and 9 books, including Planetary Crusts (with Scott McLennan, 2008) which won the 2010 Mary Ansari Best Reference Award of the Geoscience Information Society. He carried out the initial analysis of the first lunar sample returned to Earth at NASA, Houston in 1969 and Asteroid 5670 is named Rosstaylor in his honour.