Henrietta Darwin’s Diary: The Correspondence of Charles Darwin, Part One 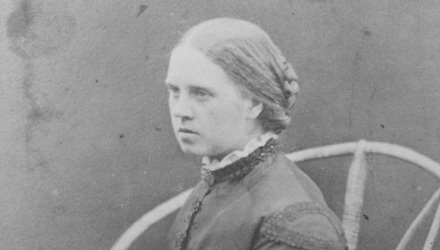 A small lockable leather diary in the archive at Cambridge University Library has led to a reassessment of one of the key relationships in Charles Darwin’s life. The Darwin Correspondence Project, with the permission of Darwin’s family, is making public for the first time the short but intense—and intensely revealing—personal journal of Darwin’s daughter, Henrietta.

Written over the period March to July 1871, the year of the twenty-eight-year-old Henrietta’s sudden marriage to a man she had known for less than three months, the journal introduces a confident, intelligent, reflective, and passionate young woman. The full text of the diary is included in The Correspondence of Charles Darwin, Volume 19: 1871.

This was also the year in which Henrietta’s father published his most enduringly controversial work The Descent of Man and Selection in Relation to Sex, a book she helped edit. Taken together with Darwin’s letters from the period, the journal dramatically overturns previous perceptions of her character and role.  Often dismissed as a conservative or even a negative influence on her father’s work, driven by a desire for respectability to acts of censorship, Henrietta emerges instead as a free-thinker; she was skeptical of the mass hysteria of evangelical missions, and unable to reconcile the idea of a personal, benevolent God either with the concept of free will or with the suffering and wastefulness of the natural world.

In a very rare glimpse of the intellectual life of the women in Darwin’s circle, Henrietta reflects on a wide-ranging debate with one of her cousins, Frances Julia Wedgwood – known to the family as Snow – on free will, good and evil, and the possibility of eternal life.  Both women demonstrate a striking sophistication of thought in their differing assessment of the implications for religious thinking of Darwin’s “Development Theory”, but although Henrietta’s arguments are reminiscent of Darwin’s own discussion of religious belief in his correspondence and other writings, the journal reveals a thoughtful woman reasoning her way to a humanistic position that is very much her own.

… It appears to be no difficulty to Sno to believe that each particular life is ordered for its particular good although the Universe is governed by fixed laws—granted omniscience & she holds that God may make the same law work for the good of each individual. Free will she has to give up in many regions & wd be prepared to give it up entirely. The questions I wish to ask are: Is another life necessary for her conception of our life on earth? How can she shake off the bonds of reason— reason tells us plainly that each life is not ordered for its own good. The most striking example of wh. are those diseases which cause certain demoralisation. That they may be necessary consequences of general laws would be my explanation—but how if we are consider human reason as in the least worth cultivating—& if we are to believe that we have ever so faint a conception of goodness can we allow this to be for the good of the sufferer? If we say my conviction of God’s watchfulness over me is so profound even this fact cannot shake it, then if we hold to this particular good of each individual we are reduced to the dilemma—either God does not care for others, or my moral sense is given me to delude me—If goodness is known to us we must be able to recognise evil—& if Goodness is not known to us how can we recognise God— So absolutely to confound the laws of reason casts me hopelessly adrift.

If we cannot kno goodness how can we recognise in which part of our nature God is revealed— If our judgement is totally at fault in the outer world, how can we know that it is m trustworthy in the inner world. This view seems to cast what few convictions I have to the winds. What are my convictions is hard to say—but that goodness is what we ought to live for—that patience & action & a constant sense of the gt. unknowable must be our props—not v. supporting ones it will be said—but eno’ to prevent despair— one other conviction I have forgotten the worship of humanity— this I hope is only in its bud— I cd conceive a life wh. was filled & made happy by a sense of boundless love & honour & tender pity for humanity. I have in a chaotic state the feeling that this world is not created by omnipotent malevolence. I have not yet thought out on what this is founded— Can blessedness justify sin? Can happiness justify misery? What evidence have we of a future world? If there is how can virtue exist without sin? & then how is the difficulty ever to be solved.

I feel that we must act as if our wills were free— must we judge as if our wills are free? If these questions are hopeless Huxleys advice is good—turn our eyes from them—but do not less the preachers of science try to conceal that they are taking away what they have no equivalent for.