What is Opera? Act II: Operas and Their Worlds

The five extracts I previously suggested all come from different genres and periods, ranging from Handel in the early eighteenth-century to Wagner at the end of the nineteenth. Not only that, but where Mozart is a product of the Enlightenment, Verdi is suffused with the spirit of Italian Romanticism. To get the most out of their work, we need to know what different composers expected of their audiences – and us. We need to be prepared to know what kind of experience they aimed to provide, otherwise our expectations are likely to be wrong – and disappointed.

This means that the next step is to start sorting out how and why are different operas are different. Are they doing different things – or doing the same things but differently? In a sense both are true: There are always basic human emotions and predicaments, but often the attitudes to them differ quite considerably. We can see this in a number of choices or variables. These include the various subject matter, characters and plot; how these reflect the world of the composer and the contemporary audience; as well as the kind of music and musical forms. This is really how one moves from an initial enjoyment of ‘highlights’ to the more profound pleasures of entire operas: how one not only engages with individual elements, but also understands how they form a wider dramatic context and meaning that is concerned with the world at large. (The updated Spotify playlist is available here.)

Monteverdi is not – quite – the first opera composer, but he is the first to have become part of the regular repertoire. His L’Incoronazione di Poppea was his last, written in 1642 for Venice. Monteverdi’s earlier operas had been written for courtly audiences, but Venice was the first city to put on opera as a public and commercial enterprise. This explains why the rather severe classicism of Orfeo had been replaced by a work that, for all its seriousness, mixes comic scenes and characters (try Act II scene 12, as Poppea is advised by her confidante Arnalta – played by a man—how to entrap Nero!) with tragic ones, such as the famous Act II scene 3 death of Seneca. It even has a distinctly erotic, immoral flavor such as Poppea and Nero’s languorous early morning parting in Act I scene 3. This was great art as entertainment – sex, comedy, unscrupulous politics, and vindictive rivalries. By the end of the opera, against all our best moral instincts, we are swept up in the beauty and intimate passion of Nero and Poppea’s extraordinary duet  “Pur to miro, pur to godo – As I gaze at you, as I possess you.”

Venetian opera now became the model for commercial success. Elaborate staging, big numbers for rising star singers – opera became less a dramatic form than an elegant entertainment. By the early eighteenth century all this had become stylized, even rigid in its treatment, for many summed up in the operas of Handel. Central to these was the kind of aria we have already seen in his Rinaldo – a da capo aria consisting of three sections, in which the third was a repetition of the first. This seemed to deny any real sense of character or situation and now became the object of Gluck’s scorn as he sought to return to opera’s original, serious dramatic roots. But despite this, his great “reform operas,” such as Orfeo and Euridice and Alceste, are still aimed at a largely aristocratic audience grounded in the history and myths of classical antiquity. The difference is that the essentially baroque use of the classical has here been replaced by the far more serious neo-classicism of the end of the century – think of Jefferson’s designs for Monticello and the University of Virginia, or the White House itself.

In Gluck, the Handelian melody is replaced by dramatic lyricism and intense emotional pressure. The overture becomes a miniature tone-poem describing the tragic setting rather than a series of tunes. Even in great set-pieces such as Alceste’s Act I scene 5 “Ombre, larve, compagne di morte – Shades, ghosts, companions of death,” the opening melodic phrase quickly disappears, and instead of the formality of the da capo form the aria is entirely moulded by the demands of the dramatic text. If we turn from the beauties of Handel and expect to find the same pleasures in Gluck, we will be disappointed. We have to know what Gluck was about and be prepared (in both senses of the word) to enter into a partnership that has its own rules, joys, and concerns. 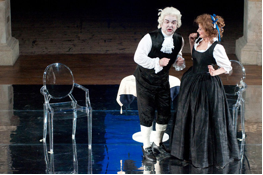 But things were changing. One way of looking at it is the growth of a middle-class audience that didn’t care for or share the values of the aristocracy and wanted opera that would reflect their own world – and entertain them. In 1752, Pergolesi’s little comedy La serva padrona – The maid mistress (originally written in 1733), was given a second run in Paris. The audience went mad for this tuneful, light-hearted, seductive picture of an elderly merchant seduced by his maid. The contrast with the high-minded operas of Lully, Rameau and Gluck was absolute and the result was a revolution in taste that would eventually lead to the profound comedies of Mozart. The Pergolesi remains a constant source of delight from beginning to end. Just try Uberto’s bemused “Sempre in contrasts – Always contradictions” – when she says “yes” she seems to mean “no” – and vice versa!  Or Serpina’s wheedling “A Serpina penserate – One day you will remember Serpina.” A new audience, a new age – and a new kind of opera was needed. 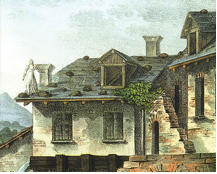 By the nineteenth century all this had started to change, and the Romantic operas of Italy, Germany and France reflect the emotional and political turmoil of the French Revolution and Napoleonic Wars. The subjects waver between the heroic and the domestic, but the music is firmly melodious and increasingly emotional. There is also a new form: the opera giocosa – neither purely tragic nor simply comic but giocosa – happy. Bellini’s La sonnambula – The sleepwalker brings a number of themes together within a bourgeois context.  At the heart of the plot is the theme of the aristocrat seducing the young maiden – except that here this is not the case, but instead a  fiction as a love-rival takes advantage of her opponent’s sleep-walking. In the end the truth comes out and all are reconciled. But we have been taken through a mixture of situations and emotions ranging from humour, through pathos to near-tragedy.  Added to this there is the dramatic revelation of the sleep-walking itself as the heroine – and prima donna – precariously walks over the mill-race (I saw Joan Sutherland do it!) or, as in this print pictured above, worse.

Melody, a recognisable domestic world and characters, excitement and suspense, love and reconciliation – all of these qualities abound in La sonnambula. Try the opening of Act II, after the chorus as Amina comes to Elvino’s farm to try to explain her innocence. We run a gamut of emotions from Amina’s despair “Ah! No…non posso – Ah! No… I cannot,” through Elvino’s grief “Tutto sciolto – All is over,” then Amina’s desperate pleading and Elvino’s rejection “Va…va…ingrata – Go…go…wretch” to the chorus’s intercession and Elvino’s admission that he cannot stop loving her “Ah! Perché non posso odiarti – Ah! Why can I not despise you.” All of this creates a quite different ethos – musically and  socially, to the classical world of Handel or Gluck, or the farce of Pergolesi’s La serva padrona; it is far closer to the world of the new bourgeois audience than either the myths and heroes of ancient Greece, or the formality of the music used in most opera to date.

To Be Continued in Part Three

About the Author: Robert Cannon

Robert Cannon is the author of Opera (2012). Cannon is an independent music critic and writer and runs dedicated courses on opera and theatre. He created the first ever degree in Opera Studies, v...