The Culture of Freud: Three Visions of Psychoanalysis from the Theater 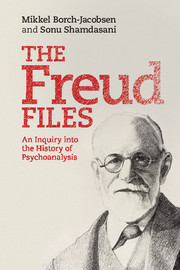 As Mikkel Borch-Jakobsen and Sonu Shamdasani discuss in The Freud Files, the legend of Freud as the creator of psychoanalysis persists to this day, and is immortalized in our books, films, and art. Richard Cronenberg’s film interpretation about the debates between Freud and Jung was released around the US last month, but Freud has become a regular fixture on the stage as well as the screen.

Mark St. Germain’s play “Freud’s Last Session,” which opened at New World Stages in New York City in the summer of 2012 is still running as of this writing; it imagines a debates between Freud and the writer C.S. Lewis. Also playing in New York during 2011 was “Hans: A Case Study,” which playwright David Pilot developed after reading the case study of one of Freud’s famous child patients.

Martin Rayner, the spitting image of Freud in “Last Session,” and Valery Oisteanu, who takes on the role in “Hans,” discussed with us their interpretations of Freud, and his enduring influence on our culture. They are joined by playwright David Pilot.

How did you prepare to take on an iconic figure like Freud?

Rayner: I read around the subject a good deal including, of course, Freud’s writings. I watched Freud very carefully on YouTube footage and based my physical on his bad posture! He is often very hunched over when he sits and he does interesting things with his wrists. I found that to be a great foundation in my preparation. Playing Freud is not only and honor, but an incredibly fun experience. Mark St. Germain gave me such wonderful dialogue, all carefully based on Freud’s writings, that I can find new things within it all the time. It stands the test of authenticity and is a wonderful foundation for my performance to stand on, and hopefully take off from.

Pilot: We met with prominent Freudian scholars and academics-Peter Gay, Harold Bloom, Robert Landy, John Munder Ross and Jennifer Stuart-each of whom has extensively researched, taught and written on the life and works of Freud and also on “Little Hans.” These scholars were key in our whole process, engaging our ensemble in their personal insights and giving us a much deeper understanding of the case: of Freud and his relationship to the real life Hans, to Herbert Graf (the famous Metropolitan Opera stage director), and to his family.

Oisteanu: I read Freud: A Life For Our Time by Peter Gay (2006), and much of the info online. I taped audio/video under my director’s guidance and listened to it. I also went to see “Freud’s Last Session.”

What did you discover about Freud that surprised you?

Rayner: A couple of things surprised me: how fun he was around children and his dog. I added this aspect of him to the more expected seriousness of his working persona. I was also surprised to discover a man whose work was sometimes flawed. I came to see him as a man who discovered and began something, but who did not always get it right. His greatness seemed to be in his vision and pioneering.

Pilot: What I discovered about Freud that still surprises me is that he was afraid to listen to music before he had made a complete analysis of it. Also, that Freud is for many, the most influential person in history. We live, talk and breathe Freud. We work everyday in a culture devised by, and devoted to Freud and his ideas.

What were the aspects of Freud’s character that you wanted to bring out in this performance?

Rayner: I wanted to show a real human being. For me, the most essential thing is to avoid the trap of playing the icon. It is an easy trap with such obvious things as the accent, the beard and glasses. They have to be there of course, but if Freud were sitting in a room with you right now, such externals would be the least of interest.

Oisteanu: I wanted to show him as a human, without pretensions or academic attitude. His advice to future parents was not to punish children physically; in my performance I had to talk (supposedly) to a very young child and I softened my voice (German/Jewish-accent included), lowered the speed of speech and introduced the inflections at a slower pace, such as a therapist might do with a small child.

How do you think Freud and psychoanalysis is perceived today?

Rayner: I feel there is a trend to more and more question some of Freud’s findings and assertions. A revision. That he could be a loose cannon and we should look carefully at what he wrote and sort the valid from the invalid. I think it fair to evaluate the work of all great thinkers from time to time. To see how they fit in our modern day lives. I believe Freud will rightly hold his place over time as a great pioneer.

Pilot: Freud and psychoanalysis continue to be the brunt of much antagonism and misunderstanding. Of course, being subsumed in a culture of Freud, it is only logical for so many to be offended, hurt and confused of this very human, very idealized pioneer of analysis. Perceptions of Freud are both fair and unfair, and all of them understandable.

What do you think we can learn from Freud today?

Rayner: To be courageous. He risked ridicule with his bold, original thinking. He was not afraid to be criticized for ideas that were pretty far out. We should all try to balance discipline with risk. Follow his example of pushing his mind to its highest level and thinking outside the box.

Oisteanu: Analysis and self-analysis: I personally went through therapy with a Freudian psychologist (it sure did help) and I use self analysis for my poetry writings till today. Many of his discoveries were based on self-analysis, provoked by a period of deep introspection after his father’s death. “I now feel quite uprooted,” Freud wrote in 1896. “There is still very little happening to me externally, but internally something very interesting ‹ I am led to my own dreams.”

Pilot: There is so much to be learned still from Freud: Different forms of analysis that involve a much more soulful, more spiritual dimension lead to an integrative, psychic healing and deep, peaceful resolutions to emotional disturbances. Freud began a great work, leading us on a greater journey in the search for meaning, of understanding human relationships and our deepest need to know ourselves.

When someone leaves the theater after seeing the show, what would you like them to come away with?

Pilot: Hans was an effort to tell a different story, a hero’s tale that began but does not end with Freud. Hans is a spiritual search, a mystical journey of an artist who lives his dream, and uses his obstacles as a ladder to it.

Rayner: I want them to feel that they were a fly on the wall of Freud’s study – that they had the amazing chance to be there with him as he used his great mind to argue with C S Lewis in an informal setting. Freud was a lot more than the icon we know; he was also a funny, charming man. Volatile, curious and deeply human. Like all great people, Freud was mixture and I want the audience to see his virtues and flaws, his loftiness and his pettiness, as they come and go. I want them to say, I spent some time Freud and met the man, not the icon.