The Origins of Anti-Pornography Feminism

The singer Rihanna rocketed to the top of the pop charts this spring with her single, S&M, which pays homage to sex accompanied by whips, chains and the intentional infliction of pain.  Having just finished the manuscript for my new book, Battling Pornography, I listened with amazement as this explicit song played freely on mainstream radio stations, not to mention in supermarkets and elevators.  How many toe-tapping listeners, I wondered, knew that the question of sadomasochism electrified the American women’s movement in the late 1970s and 1980s?  The conflicts began on the West Coast, pitting a community of Bay Area lesbian sadomasochists against members of the newly emerging feminist anti-pornography movement.  These women disagreed as to whether sexual behavior that seemed to involve violence could be practiced or depicted in ways that did not foster oppression.  Their debates over potential social harm were so hotly contested that the National Organization for Women (NOW) stepped into the fray.  Siding with anti-pornography feminists, the organization declared in 1980 that sadomasochism and pornography constituted violence, not sex, and were inherently dangerous.

Today, the feminists who led an anti-pornography movement have been vanquished, one might argue, relics of a pre-digital age when there were concrete local targets to fight, like removing Hustler magazine from convenience store shelves or asking the Mann movie theatre chain in Southern California to stop exhibiting an X-rated “snuff” film.  Every imaginable form of pornography is now available via the internet, just a click or two away, and the obstacles to eradicating such images seem insurmountable.  But, to dismiss anti-pornography feminists as moralistic, anti-sexual “marchers with bees in their bonnets,” as Rolling Stone band member Keith Richards did in 1976, is dead wrong.  In doing so, we ignore a nuanced history of media reform organizing led by activists who believed that women could only enjoy  true sexual freedom in the absence of violence.

When I investigated the origins of the feminist anti-pornography movement, I came to understand that these activists initially opposed media images of sexual violence, not sex.  They believed that the glorified images of sexual violence evident in mainstream advertising, television, and Hollywood films taught women to accept brutal treatment as their due, and taught men that rape, battering, and other forms of physical abuse were a normal and expected part of male sexuality.  Both women and men were dehumanized by these gender stereotypes, and the threat of male violence blocked women from claiming the authentic sexual freedom that the sexual revolution had promised, but not fully delivered.  As I show in the book, early anti-pornography activists set out to educate the public and to demand that media corporations depict women and men in socially responsible ways, not to ban pornography.

Over time, however, it became more difficult to communicate this multilayered theory involving gender, media effects and human rights.  Social movements, including the anti-pornography movement, are vulnerable to external pressures from the news media, the agendas of related interest groups, the desire to achieve concrete goals, and the constant need to recruit members and funding.  For these reasons, movement leaders made a strategic choice to focus on pornography.  The broad-based campaign against media violence fell to the wayside, and in its place, a controversial anti-pornography campaign arose that ultimately divided feminists from one another, as well as from free speech advocates, liberals, sexual minorities, sex workers, and a host of others who feared censorship and restrictions on sexual freedom.  Some feminists were so opposed to the ideas and actions of the later anti-pornography activists that they organized a counter-movement to present a feminist case in defense of erotic rights and against censorship.

In Battling Pornography, I tell this story through the history of three overlapping grassroots movement groups:  Women Against Violence Against Women (Los Angeles); Women Against Violence in Pornography and Media (San Francisco); and Women Against Pornography (New York).  These groups were home to some of the nation’s best known feminists, and the tale of their activism unfolds against the backdrop of the sexual revolution, the growth of radical feminism, the commercialization of sex in 1970s America, and the rise of the New Right.  Comparing the groups’ names over time tells you quite a bit about how the movement evolved, concerned first with violence, then later introducing the idea of violence in pornography, and finally, focusing on pornography itself as a form of violence.

So what do you think of when you hear Rihanna’s pop song playing on the radio?  Do you feel thankful to live in a society that tolerates sexual diversity and provides a good degree of freedom for consenting adults to interact as they please?  Do you feel troubled by the reality of a celebrity battered by her boyfriend glorifying sex involving domination, whips, and chains?  Do you think that a song with violent sexual lyrics could teach people to act brutally, and possibly encourage rape?  Battling Pornography presents each of these arguments and explains how feminists in the 1970s and 1980s struggled to make sense of a newly sexualized public sphere and the increasing prominence of pornography in American life. 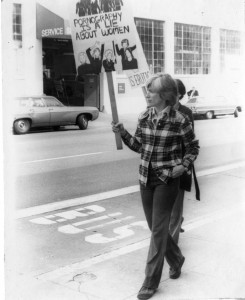 About the Author: Carolyn Bronstein

Carolyn Bronstein is the author of Battling Pornography (2011). She is associate professor of media studies in the College of Communication at DePaul University. Her research investigates que...