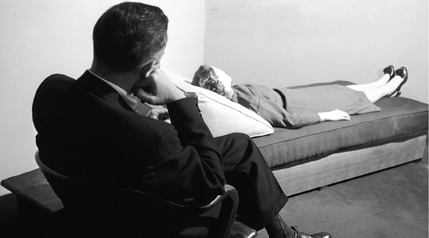 Ian Dowbiggin is the author of The Quest for Mental Health (2011), and here he takes a few minutes out of his work to answer our questions.

Ian: Like many people of my generation, I grew up at a time when you were taught to deal with your emotional problems by yourself and get on with your life.

Having “the blues,” feeling grief over a loved one’s death, or being shy in social settings wasn’t considered a sickness. That countless people today believe and act differently is nothing short of a revolutionary change in the entire way we view our inner selves.

..too many (people) are prescribed drugs like Prozac without a careful analysis of patients’ life and family histories.

It may be true that many people in earlier generations were suffering in silence because they were discouraged from being open about their feelings, but I also think that the new openness actually makes an equal number feel worse and prevents them from overcoming their disabilities.

As an historian, I was curious how this momentous change had taken place-a shift that overlapped my own lifetime-and so I decided to write a book about it.

Q: In your book, The Quest for Mental Health, you argue that the “culture of therapism” is one of the main factors at fault. Define therapism, and what were the key factors that triggered its rise?

Ian: Therapism is basically a mentality which says that if you’re struggling with the emotional challenges of everyday life, you probably suffer from a certifiable mental illness beyond your control and you need to consult experts in the psychological sciences for help. Where therapism reigns, more and more people report they are emotionally unwell because therapism implies that individuals have a kind of right to be sick and seek so-called expert assistance.

It’s easy to blame professions like psychiatry for breeding therapism, because they have frequently encouraged populations to believe in it, but in recent history other factors have come into play: the drug industry (“Big Pharma”); the media; third-party insurers (whether government or industry); schools; the courts; and the growth of other helping professions like psychology, nursing, social work, and marriage counselling.

Then there are the 5 “A’s”: aging, addictions, advertising, administration, and author Oliver James calls “affluenza,” the late 20th century malaise caused by the failure of consumerism to provide us with emotional fulfilment.

It’s tempting, in other words, to trace therapism to one or another factor, but as this list suggests, it’s just not that easy.

Q: You include examples from a wide range of countries. Are they any surprising differences in terms of how they address mental health?

Ian: Historians writing about global events are always doing a bit of a balancing act: while they’re on the look-out for cross-border similarities, they constantly run up against national differences. There are countless dissimilarities between, say, the U.S. and countries like Canada or Britain or France.

For example, psychiatrists in Britain diagnose schizophrenia far less frequently than U.S. psychiatrists, and even an industrialized country like Japan has differed dramatically in the past from other industrialized countries when it comes to psychiatric drug usage. But recently globalization has been breaking down national distinctions in the quest for mental health. In what might be called a case of U.S. psychiatric imperialism, American medicine is exporting its methods of diagnosing mental illness, “homogenizing the way the world goes mad.”

Q: There has been a growing controversy regarding the efficacy of drug-based treatments for mental illness. What are your thoughts on this?

Ian: Like almost everyone else, I know people who have been helped by psychiatric drug treatments, but I also know that the drug industry plays a big role in medical research, and even it acknowledges there is a risk of suicidal thoughts and behaviour for some patients taking SSRIs [Selective Serotonin Reuptake Inhibitors].

The big question is not whether this risk exists, it’s how many people should take these medications. My take as an historian is that too many are prescribed drugs like Prozac without a careful analysis of patients’ life and family histories, and that the big profits to be made from prescription drug use certainly shape this trend.

Q: What needs to be done in order to stem the mental illness epidemic?

Ian: Something has to be done to stem this epidemic because it’s a major reason behind the escalating health care costs which threaten to bankrupt governments today.

The thing that strikes an historian like me about mental health care in the early 21st century is how many vested interest groups have a stake in the system, from the drug and insurance industries to patients and their families. Obviously, serious reform can only take place when all stake-holders work together in a spirit of public service to reduce inefficiency and devise best-practices.

Third-party insurers could scale back coverage for certain types of treatment. But meanwhile many of us can do something on our own.

Perhaps we need a “new stoicism” which says that our default position should not be to resort to professional help whenever we encounter what Shakespeare called “the slings and arrows of outrageous fortune,” but simply to grin it and bear it with the same fortitude our ancestors used to build our great countries. People might also be able to discover sources of spiritual strength in their own faith communities.

That, too, is what our ancestors did.

Ian Dowbiggin is the author of The Quest for Mental Health (2011).

How to Read an EEG