A Day in the Life on Erebus Volcano, Antarctica

Clive Oppenheimer author of Eruptions that Shook the World (now inspiration for a major documentary Into the Inferno by Werner Herzog) and leading volcanologist invites you to spend a day with him and his team atop an active volcano.

Eruptions that Shook the World author and leading volcanologist Clive Oppenheimer invites you to spend a day with him and his team atop an active volcano.

Read more about volcanoes that changed history at the Cambridge Book Club. 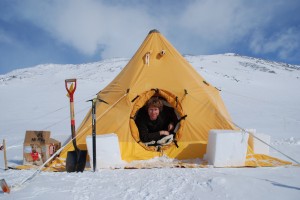 8.30 am: The worst way to wake up on Erebus is from the terrifying noise of a Bell 212 right outside the tent on its final approach to land. It means a scramble to come to after probably just a few hours sleep, get warmly dressed, remember to extricate one’s “pee bottle” from the depths of the sleeping bag (so it doesn’t freeze solid), and then emerge into the brutal, dry air to help unload the helicopter. This time some cardboard boxes packed with “freshies” have arrived – our first sight of anything that still resembles a vegetable since leaving McMurdo two weeks ago. Also some assorted cases of scientific equipment we have been eagerly awaiting.

10 am: Load and fire up the snowmobile and zip across the sastrugi (wind-shaped grooves and ridges in the snow) up the side of the volcano towards the crater, a mile and a half away. Park above a local landmark known as Nausea Knob, where the snow cover gives way to a steep slope strewn with lava bombs erupted over the last few years. Remember to avoid taking an eye out with bungee cords while unfastening the equipment, and trudge up 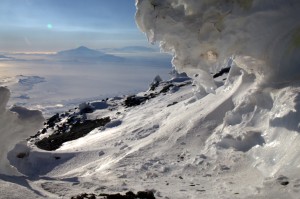 towards the crater rim. By now I’m used to the altitude (over 12,000 feet) and the going is not too bad even though I’m carrying an automotive battery, gas sensing equipment and an air pump. I reach the edge of the crater and peer down to the fiery and steam-puffing lava lake on the crater floor, 700 feet below.

1.30 pm: The air temperature is minus 30 oF but with only a gentle wind and bright sunshine it is a perfect day to work. Icicles are hanging down from my hair in front of my eyes. I set up all the science gear: an infrared spectrometer and some gas sensors to measure the emissions from the lava lake, samplers to catch volcanic particles carried in the air, and a thermal camera to map lava temperatures. The spectrometer is a resilient but temperamental piece of equipment, so I am pleased to see it behaving! 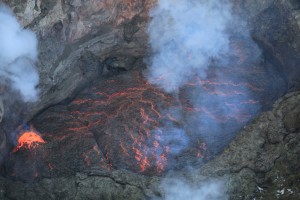 2.30 pm: I’m ready to head back to camp, which I can just make out in the distance thanks to its regular outline amongst the mosaic of lava rocks and snow. Back inside, I prepare a culinary masterpiece: fried Swiss cheese sandwiches with Vegemite smeared on top. I follow it with strong coffee. (My luxuries here include a stove-top coffee pot, a supply of Ethiopian coffee, and a cute set of espresso cups.)

6 pm: Return briefly to the crater rim to check everything is still running OK and to top up the supply of liquid nitrogen in the spectrometer. It might be cold up here but the device works best with its detector cooled more than 300 degrees below zero Fahrenheit!

8 pm: Our team has converged at the dinner table – twelve of us in all. This is our ritual hour of communal banter and planning. Our designated chef has improvised a pad thai, and Hut veteran, Nelia, has baked her signature dish of flan. Using REAL eggs and cream that arrived with the freshies this morning. I almost cry it tastes so good and so out of place.

9.30 pm: Drama! Someone discovers the urinal pipe has frozen! We pull out the hosing that connects to a big fuel drum outside and hang it over the stove. This turns out to be a VERY bad idea! I might spend hours breathing in acid and toxic volcanic gases up on the crater rim without any evident side-effects, but urine fizzing off the Preway stove proves totally insufferable… 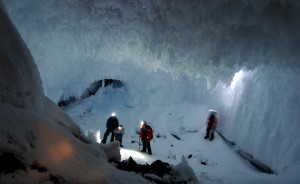 Midnight: After some rounds of cards, and since it is such a beautiful night, we decide to set off on our snowmobiles a few miles round the volcano to a place called Cones. It has a magnificent view of Hut Point Peninsula and the sawtooth-edged Erebus Ice Tongue far below the sweeping, crevassed slopes of the volcano; and beyond of the Ross Sea and Ice Shelf, Mount Discovery, and the Royal Society range.

Nearby are several steaming ice towers, part of a chain that leads up the Erebus summit cone. They are made up of blue, banded ice chunks and covered with a soft snow that flutters out of the mouth of ice chimneys. The towers are built over ice caves; we set up stakes and ropes and rappel down a narrow chimney into one of them. The chamber at the bottom, 60 feet down, is composed of a mass of icicles covered with clusters of white ice crystals, frosted lava boulders; and an impossibly blue light filtering through the roof. It’s much warmer inside the cave and we take off our heavy parkas (known as “Big Reds”). Further on, we enter another chamber with delicate hexagonal crystals, perfectly transparent icicles and ice stalagmites, and some ice formations that look like sea fans and coral heads. I doubt the mind could conjure up such wonders. After a few hours, we jumar out, one by one, struggling a bit at the top to get over the lip of the ice chimney, and emerge into brilliant sunshine and freezing air that solidifies our wet gloves in seconds.

4.30 am: We arrive back at Lower Erebus Hut, exhausted but exhilarated. 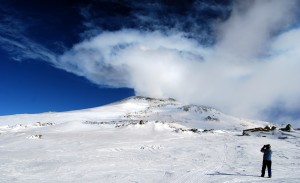 About the Author: Clive Oppenheimer

Clive Oppenheimer is author of Eruptions that Shook the World (2011). He is a Reader in Volcanology and Remote Sensing at the University of Cambridge and a Research Associate...