What the Tea Party Could Learn from Roe v. Wade 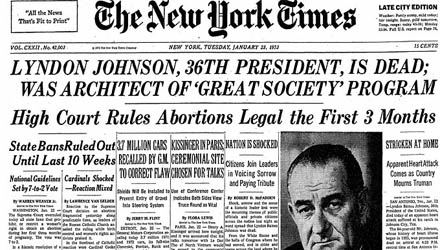 On the eve of the 38th anniversary of Roe v. Wade, a new Congress has come to town.  Many members are focused on making dramatic policy changes.  The newer members who identify with the Tea Party have brought with them a fervor to shake things up and do things differently.  Even more experienced members are drawn toward this new spirit.  In a recent interview, Republican Representative Paul Ryan said, “I am so sick of playing small ball….The country doesn’t deserve small ball.  The country deserves real answers to the enormous problems facing us.”  In the recent past, small ball has been used to win political battles—even some battles that many observers felt needed grand, sweeping policy changes.

The new members of Congress could do well to learn lessons from the policy changes over the last few decades that have transformed federal abortion policies.  One of the primary lessons is this:  you can make considerable policy adjustments with a sustained “small ball” incremental strategy.  The change does not come all at once, it comes over the decades, as the small changes accumulate.  Much like a snowball rolling down the hill, what starts as a small ball, with sustained action, can evolve into a dominant force.

For pro-life Members of Congress, one of the first small balls was an amendment to the legislation creating the Legal Services Corporation.  Although the LSC was never focused on abortion rights, that amendment banned the LSC from ever handling any lawsuits related to abortion rights.  Soon after, the late Republican Representative Henry Hyde of Illinois began a sustained effort to ensure that no federal funds were spent to support abortion rights.  The same basic Hyde amendment was repeatedly employed, ensuring that no federal funds were used for abortion services.

Members who wanted to move abortion policy more in the pro-life direction kept the abortion issue in the public eye and on the Congressional agenda by limiting international abortion access, including the very bipartisan efforts related to coercive abortion policies in China.  Many pro-choice members, including former Speaker Pelosi, sought legislative means to pressure China to rescind coercive abortion policies.  Forced abortions were neither pro-choice nor pro-life.  The effort to limit so-called “partial birth” abortion was another incremental move; it took what many viewed as the most difficult to defend abortion activity and sought to ban it.

The results of these and other abortion-related legislation have been to steadily move abortion policy in a direction where federal policy greatly limits access to abortion services.

But with a new, conservative majority why not push for a bigger, non-incremental legislation?  The answer is simple—there are too many institutional and political barriers to greater policy movement.  Senate filibusters and presidential vetoes create one set of roadblocks.  But the larger issue is that, for many House members and Senators, big policy change is too difficult to explain to constituents and interest groups.  Big policy change also engenders big responses – attack ads, editorials and opinion pieces, and sustained controversy – all of which create headaches for the more moderate members of Congress.  For the last two years, President Obama and the Democrats in control of the House and Senate steered clear of the Freedom of Choice Act, which would codify Roe v. Wade.

When considering abortion politics, budget cuts, entitlement reforms, climate change, and other policies, the new majorities should not forsake policy improvements secured from small legislative changes.  Attacking small ball while promising a spectacular homerun is risky on both political and policy grounds.  Republicans and Democrats alike would do well to pursue the benefits of small ball this political season.

About the Author: Scott H. Ainsworth

Scott H. Ainsworth is a co-author of Abortion Politics in Congress (2011). Ainsworth is an Associate Professor of Political Science in the School of Public and International Affairs at the University of Georgi...

About the Author: Thad E. Hall

Thad E. Hall is a co-author of Abortion Politics in Congress (2011). Hall is an Associate Professor of Political Science and a Research Fellow at the Center for Public Policy and Administration at the Universi...