As yesterday afternoon wore on, the Tucson area was enveloped in a strange cloud pattern called the Pineapple express—a very long, thin band of clouds stretching all the way from Hawaii.  Over Los Angeles the rain had been pouring for days, and we heard late in the afternoon from our dear friends Bobbi and Larry Gershon that they’d probably be washed out.  We had some clearing in the afternoon but by nightfall the clouds covered the entire sky.  However, the rising full Moon shone through the thin overcast.

At 10:30 p.m. Thom and Twila Peck arrived.  We said “surprise!” to Wendee, for this eclipse was to begin with a mortgage burning party.  For the first time in over thirty years—during which time I lived first on William Carey Street, then at our wonderful home in Vail, Arizona, we now own our property outright:  The grounds, the observatory, everything, now belongs to us, not to a bank.  Thom took some great pictures of the burning papers, individually signifying prosperity, love, health, happiness, and peace, all done outdoors under the full Moon.   Shortly after 11 PM I noticed the first sign of penumbral shading that, by 11:30, had morphed into a dark shadow that began its move across the Moon.  It was a beautiful total eclipse of the Moon, the first in 2 ½ years.  It was my 79th eclipse, which includes all total solar and lunar eclipses I have witnessed, even the shallow penumbral lunar eclipses.   It will be an event that brings me back to the great lunar eclipse of December 30, 1963 (my 4th eclipse) which is something I will never forget. 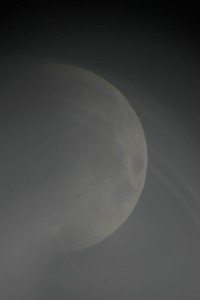 The sky over Montreal that night, so long ago, was clear and extremely cold, the temperature well below zero Fahrenheit.  As the Moon entered the shadow of the Earth that night, it seemed to go through its waning phase very quickly.  Then totality began.  I fully expected to see the Moon as a dull red object hanging in the sky.  It just wasn’t there, neither red, nor brown — it just vanished!  A close friend had driven out into the country outside of Montreal, andreported that he saw the Moon through binoculars, as a 5th magnitude object.  The extreme darkness of this eclipse was later explained by the dust in our atmosphere that had emanated from the eruption of the Mount Agung volcano in Bali, Indonesia 9 months earlier.  Apparently the dust ejected into the stratosphere was still blocking enough light to darken the Earth’s great shadow.

The stratosphere is a lot cleaner now, so we did not expect Monday’s eclipse to be that dark.  The Moon was high in the sky, near Messier 35 in the constellation of Gemini.  But about three quarters of the way through the opening partial phase, small, then larger, holes in the thin cloud cover began to appear.  Within a few minutes we had a gorgeous view of the eclipsed Moon.  On the Danjon scale, I estimated the luminosity as 2.5.  Then, shortly after 12:30 a.m. on the day of the solstice, the Moon entered total eclipse.  The sky was dark enough so that we could see dim objects like M41 in Canis Major, the Orion nebula, and details within the Pleiades, as well as seeing a faintly ruddy-colored Moon surrounded by a rich field of stars in the Gemini portion of the Milky Way.  I thought that this was near the place where Clyde Tombaugh discovered Pluto 80 long years ago.

For me, the main thrill of a lunar eclipse is that it does not show the sky as a static place, but one that is happening.  The heavens are dynamic.  An eclipse also shows that whatever our problems are here on Earth, they are all reduced to a dull colorless line in space, as Thomas Hardy suggested after the English eclipse of 1903. His poem really gives us something to think about as we ventured outdoors, in the back yard of the home we adore, to see the great eclipse of 2010. 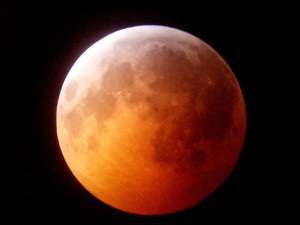 The Total Phase by Thomas Peck

Thy shadow, Earth, from Pole to Central Sea,
Now steals along upon the Moon’s meek shine
In even monochrome and curving line
Of imperturbable serenity.

How shall I link such sun-cast symmetry
With the torn troubled form I know as thine,
That profile, placid as a brow divine,
With continents of moil and misery?

Hardy is still right; we live in a troubled world.  But for a few brief hours its shadow fell on its satellite, showing us all the majesty of the night sky.

About the Author: David H. Levy

David H. Levy is author of David Levy's Guide to Eclipses, Transits, and Occultations (2010). He is also President of the National Sharing the Sky Foundation, and is one of the most successful come...