The Fifteenth Anniversary of the Srebrenica Genocide: Srebrenica-Potočari Memorial Center—Part Two of a Series

Placemarker for the President of the Republic of Serbia, Boris Tadić

The space inside the memorial center was shared uneasily with the delegations of visiting dignitaries and special guests invited to participate in the commemorative ceremony marking the fifteenth anniversary of the Srebrenica genocide. Standing front and center next to the open musala (covered prayer space), foreign leaders waited patiently for their turn to wax eloquent about the significance of the day’s events. White labels outlined where each of them was scheduled to stand, shoulder to shoulder.

Among the highest-ranking foreign dignitaries attending the ceremony was Turkish Prime Minister Recep Tayyip Erdoğan. In his speech to the crowd, he argued that Srebrenica “dealt a heavy blow to human dignity,” and, therefore, would stand as “a black mark for Balkan as well as European history.” He gave a nod to his colleagues in the audience, commenting “the presence of [Serbian] President Tadić here today is a historic step for a bright future.” It was, however, the absences that were most telling. The Republika Srpska government declined to send its top officials and instead was represented by the Minister for Refugees and Displaced Persons, a deputy prime minister, and one of Prime Minister Dodik’s advisors.

While the VIPs of neighboring states helped to keep the spotlight on Srebrenica, some organizers rued the fact that their concomitant entourages unduly turned attention and resources away from those most intimately connected to the event and the place. For example, the 56-person detail, including bodyguards, Erdoğan brought with his delegation filled space best saved for the families, many of whom were unable to arrive on time to the services in part because of the crush of foreigners attending in their convoys. 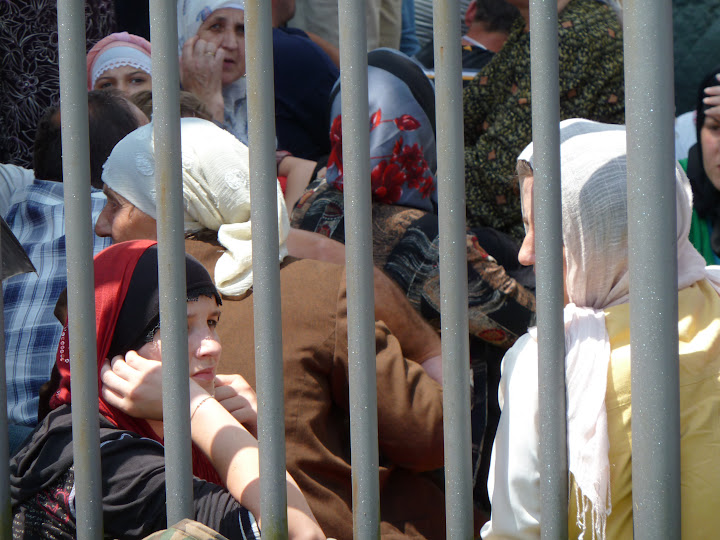 Inside the gates of the Memorial Center

From the vantage point of the musala, it was easy to see how the space inside the memorial center had changed over the years. The open fields of grass within the gates were now almost entirely filled with graves, leaving less and less room for visiting family members to pay their respects before the gravesites, the fruits of the arduous and time-consuming process of the DNA-based identification. It also brought into conversation the role of each individual present inside the gates on July 11: Who was this day for? Who should be there?

These questions of intended audiences and privileged presence were thrown into relief not only by the limited access to the already cramped space within the center, and especially the cemetery, but also by the tension among the layers of community gathered that day–local and international An elderly man approached the main gate after the ceremony had already begun only to be turned back brusquely by security personnel. “I just want to pray,” he said in frustrated bewilderment. Even well after the speeches began, the flow of bodies still bottlenecked at the alternate entrances; people pushed against one another, trying to squeeze into an open lane of foot traffic. At the same time, the space outside the center teemed with activity. How to make sense of these disparate scenes — of families picnicking outside the cemetery gates or impromptu roadside stalls selling roasted lamb and ice-cold drinks, with the solemn procession of green coffins into the cemetery? 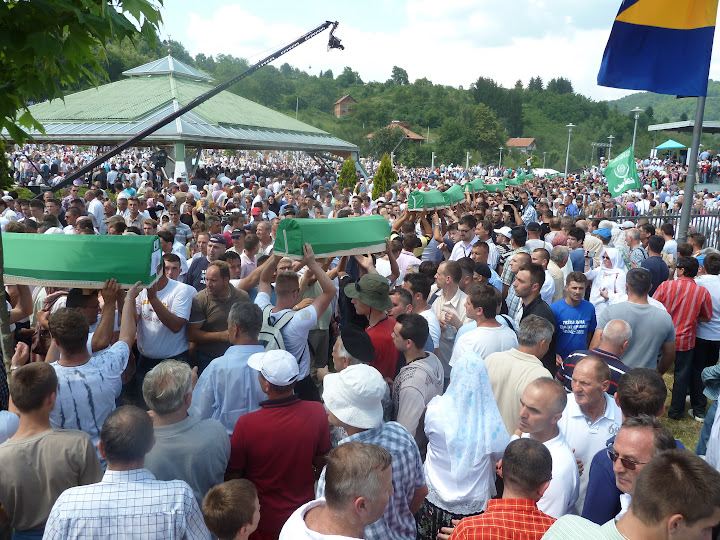 Tabuti (coffins) on their way to their final resting place

Aware of the spotlight, if not air of spectacle, the head of the Islamic community in Bosnia, Reis-ul-Ulema Mustafa Cerić played to both the local and international audiences, to his domestic and diaspora constituents, when he capitalized on his role as the religious leader of the ceremony by making two overtly political appeals. He first beseeched the European community to let Bosnia out of its “ghetto,” the restrictive visa system that keeps its citizens from traveling freely (unlike, notably, the other states of former Yugoslavia such as neighboring Croatia and Serbia). And then for his diaspora, he urged the governments of Europe to stop detaining Bosniak men at their airports on the basis of their Muslim names. Although his remarks received a smattering of applause, many were left wondering what visas and airport detentions had to do with the victims being interred and honored that day.

After the speeches and the funeral prayers ended, the dignitaries left the memorial center and the real task of the day began: to bury of the remains of 774 men and boys. (There was one female victim being buried, the mother of the outspoken advocate for the Srebrenica families, Hasan Nuhanović.) Standing apart from the rest of the bright green tabuti (coffins) was that of the sole Catholic victim. The long process of passing the coffins to their final place ensued, an effort that would take hours. In a few cases, there were no relatives present to serve as pallbearers, and volunteers quickly stepped in to carry out this final act of respect. Thus, the collective nature of the ceremony ensured that even those victims whose families could not attend were honored with a sanctified, witnessed burial. 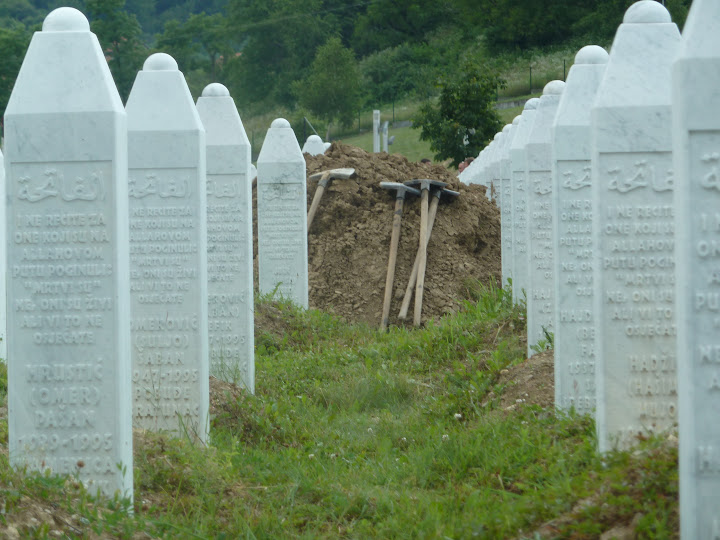 Tombstones in the Srebrenica-Potočari Memorial Center and Cemetery 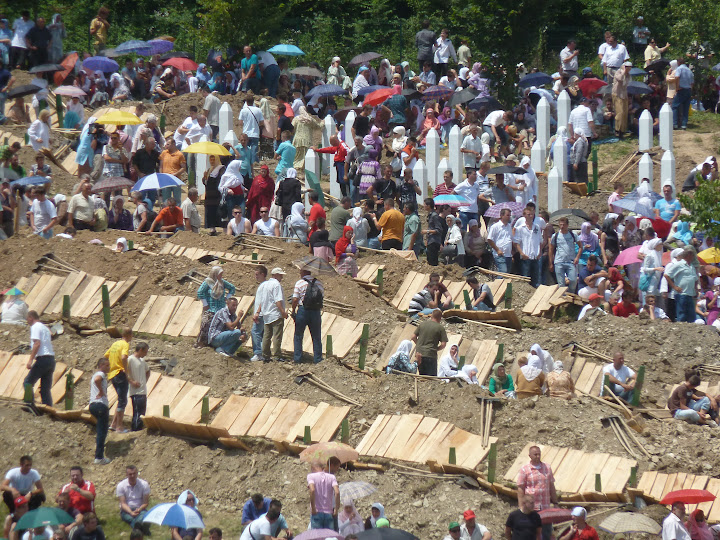 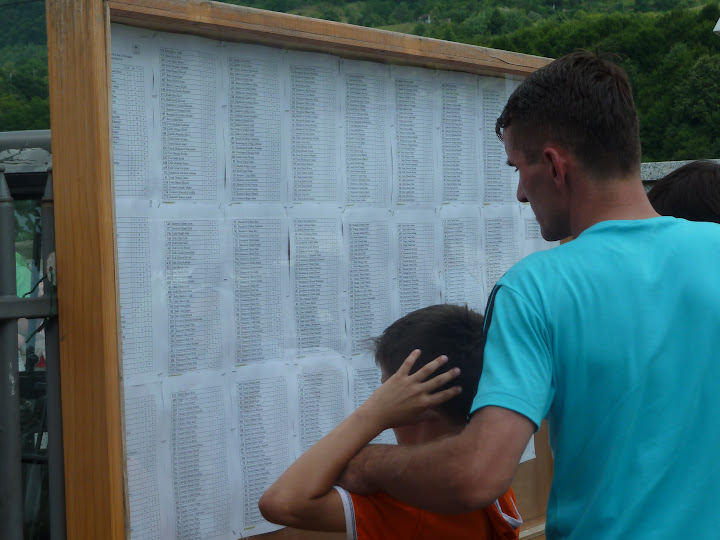 Looking for location of grave plots 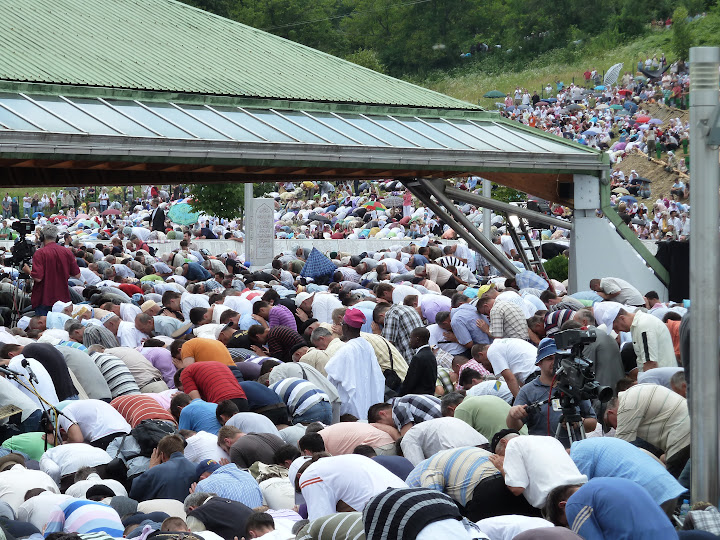 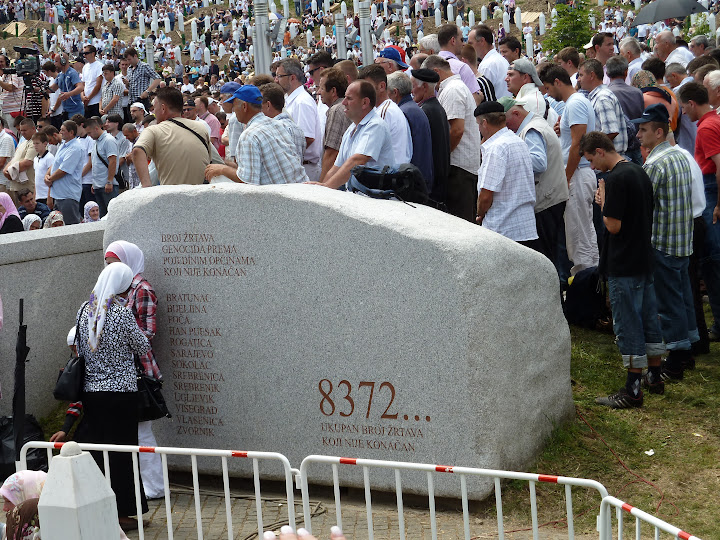 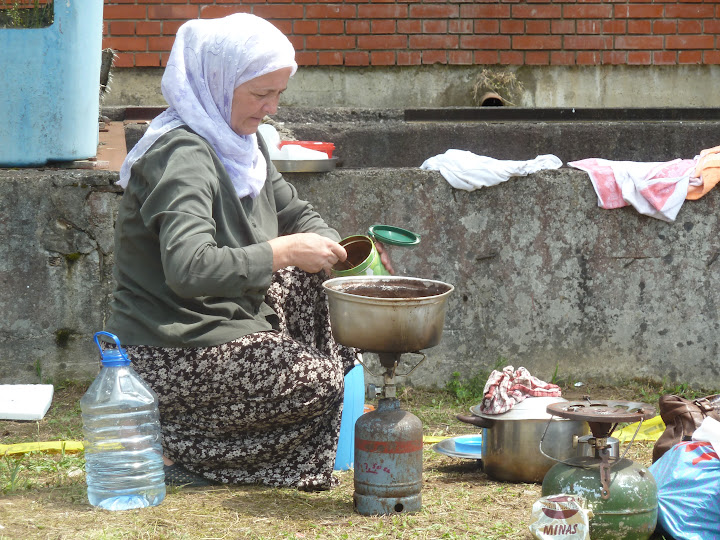 Making coffee across from the Memorial Center 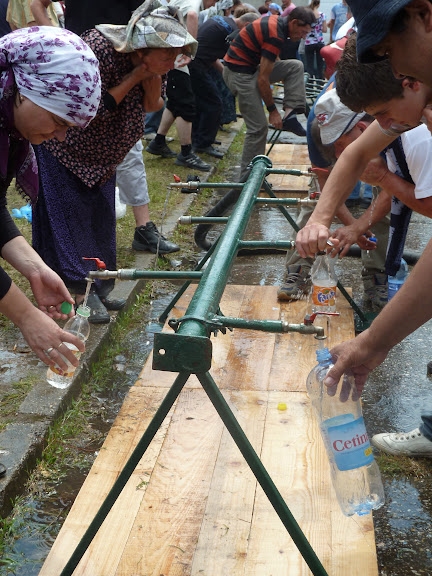 Water for ablution and thirsty attendees 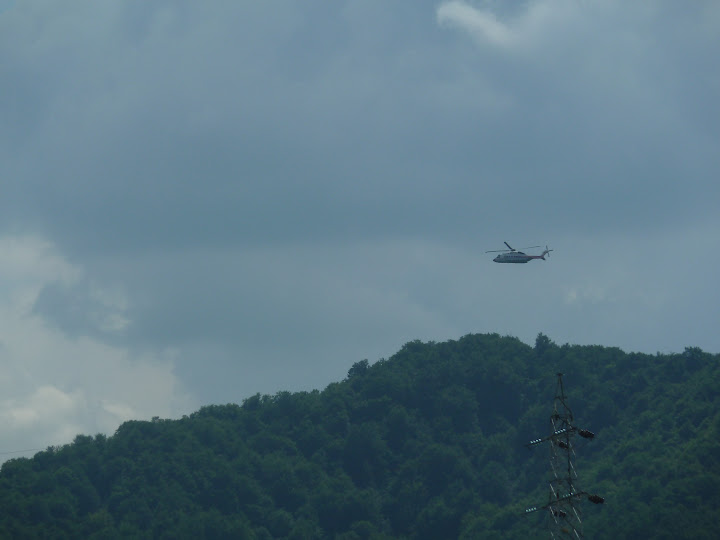 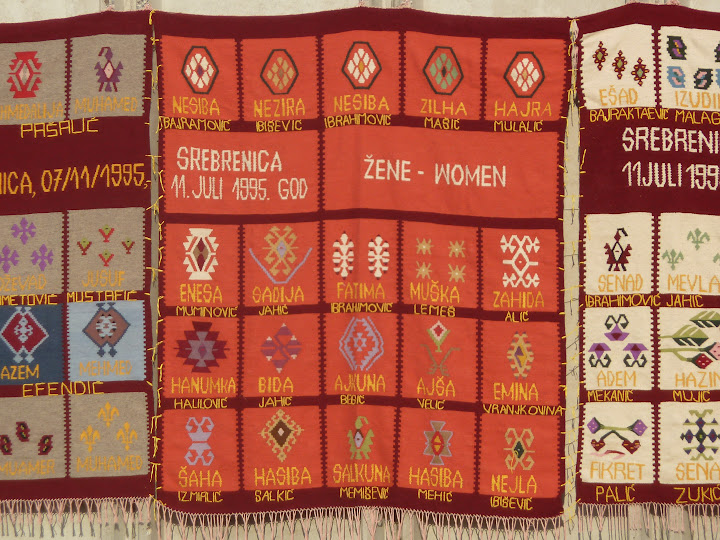 Quilts made by the Women of Srebrenica 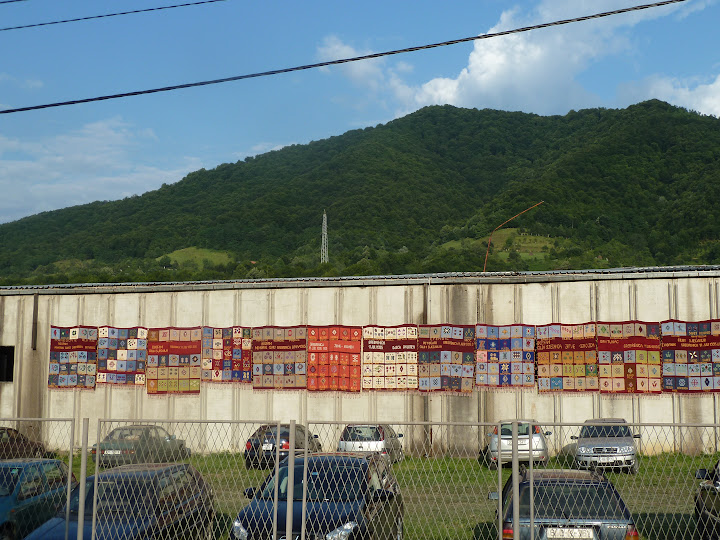 Mounted on the Battery Factory in Potočari 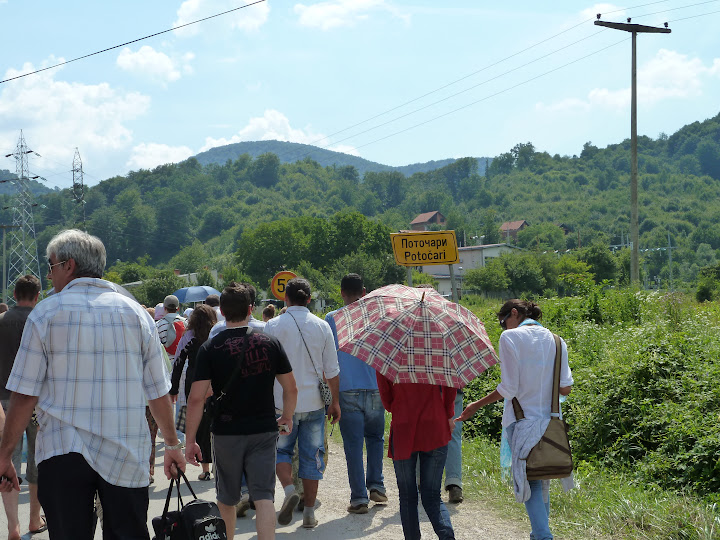 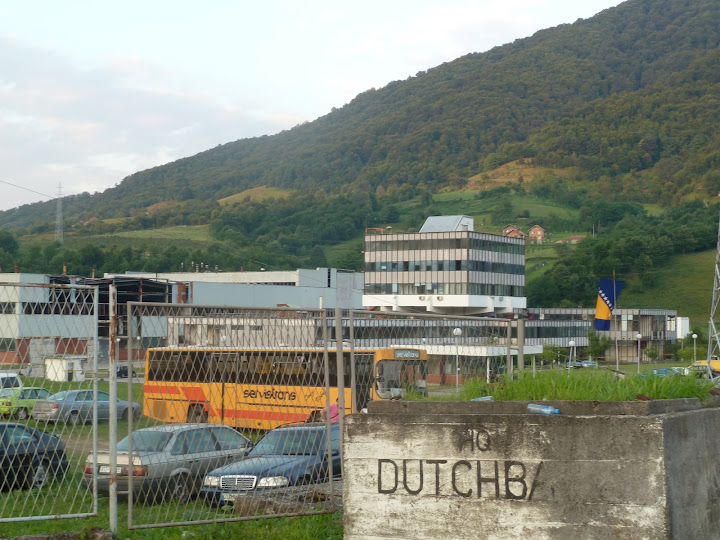