Immigration in Arizona: is the Federal or State government in the right?

On Thursday, July 29, 2010, the tough new Arizona immigration law is scheduled to take effect.  The Obama Administration filed a lawsuit against the State of Arizona on July 22 asserting that the state has overstepped its authority in cracking down on illegal immigration and that the Arizona law was blatantly unconstitutional.  In fact, it is some of the suit’s central arguments that represent an overstepping of federal authority.

The arguments the Department of Justice makes in U.S. v Brewer are not supported by the text of the U.S. Constitution, do not jibe with the reality of U.S. immigration policy, and are historically inaccurate.  In a suit, to be heard in the U.S. District Court in Phoenix on July 22, the Department of Justice attorneys repeatedly assert the “preeminent authority” of the federal government to regulate immigration matters and that this authority is “constitutionally reserved to the federal government.” Arizona, or any state for that matter, my not “establish its own immigration policies.”

As far as constitutional support for the notion that immigration is exclusively a federal power, the U.S. Constitution only states in Article I, Section 8 that Congress may “establish uniform rules of naturalization.”  That very narrow phrase hardly covers the vast array of immigration activities undertaken by the federal government today, including but not limited to:  the admission and regulation of temporary workers and tourists; the granting of permanent residency status (a green card) to close relatives of U.S. citizens and lawful permanent residents; and the temporary admission of foreign sports stars and entertainers into the U.S. 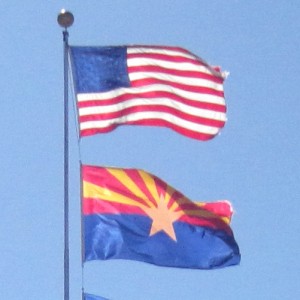 Critics of the Arizona law are right to be concerned about the deleterious impacts of the law on the ability of local law enforcement to effectively serve and protect their communities in light of their new mandate to also enforce immigration laws.  Minority communities also have good reason to be concerned about the rise of racial profiling and harassment of foreign looking and sounding persons.  However, the legal tack undertaken by the Justice Department’s case against Arizona ultimately undermines its overall objective of overturning the Arizona law, and improperly crosses borders of its own.

About the Author: Anna O. Law

Anna O. Law is the author of the book The Immigration Battle in American Courts (2010). She is an Assistant Professor at DePaul University. She previously served as a Program Analyst at the Uni...