The view from Cape Town

Hey all, did you know we have an office in Cape Town, South Africa? Well, now you do.
And like yours truly, they’re stoked about World Cup.  Here’s a blog from our South Africa marketing guru, Ashley Parsraman:

“French are the first to surrender”;
“Americans arriving at the last minute”;
“Italians seen making a hasty retreat” and alas, my favourite…
“England left to fight the Germans!”

The World Cup has offered enough twists and turns to surprise even the most creative soap opera writer. South Africa has been transformed by the experience and none of this excitement has been diminished by our early exit. It has indeed been a nation-building experience with all South Africans galvanised in their support of Bafana Bafana, and more importantly, galvanised in our efforts in ensuring that this is the best World Cup ever. World Cup paraphernalia is everywhere but especially evident in major cities like Cape Town. A sea of international flags, soccer jerseys and other World Cup paraphernalia adorn lamp posts, billboards, cars and people alike.

The African Branch has left no stone unturned in their support of the World Cup. Our sales staff, in Bafana Bafana football jerseys, are warmly greeted by final year (matric) students attending Winter Schools. The branch is currently involved in promoting a series of exam guides, aptly titled PASS, ahead of the final examinations in October.

Local staff have also entered several (branch generated) competitions ahead of the World Cup. Our receptionist, Amanda Mbenya, has skilfully captured the mood and excitement of many staff by transforming the front desk into something of a World Cup shrine and has won an award for her efforts – “Most Innovative workspace”. 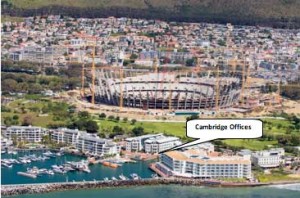 The Cape Town office is quite close to the stadium!

The Cape Town stadium is (quite literally) a stone’s throw away from the Cambridge office and staff took advantage of going on a stadium tour just before the start of the competition. This is probably the closest members will get to the FIFA VIP section and, we certainly hope, the holding cells.

And then, the blasted (pun intended) vu-vu-ze-las! Opinion varies widely on South Africa’s latest export from eager supporters who’ll cease any opportunity to showcase their skills to those who have described it as sounding like a swarm of deranged wasps on steroids. The latter, I’m sure would be much happier if it was assigned to a recycling scrapheap. You may however be interested to know that Poland’s trade unions Solidarity is eyeing the South African vuvuzela as an attention-getter to use at protests. It certainly has our attention right now…

With over 700,000 tourists visiting our shores during the past month, the South African tourism economy is, by and large, set to benefit. The long-term legacy of the tournament visible in massive infra-structure development the country has ever experienced. Most notably, Gauteng has undergone a radical facelift with its new intracity Gautrain set to revolutionize rail transport in this province. Arguably the biggest benefit for South Africans though is the manner in which the entire country stands united as hosts to the ‘biggest event on earth”. We have taken immense strides as a nation to show what South Africans are capable of and this bodes well for the future of both the country and continent.