Witch Hunts and The Hammer of Witches – or – Sin, Punishment, and Retribution

First published in 1486–7, the Malleus Maleficarum (Latin for “The Hammer of Witches”) is the standard medieval text on witchcraft.  A famous treatise, it attempted to systematically define and describe forms of witchcraft and its remedies—providing a counter to those who might deny the ‘reality’ of witchcraft and assistance to those judges who might need more information on how to prosecute it.  In short: a fascinating handbook for your everyday Late Medieval European witch-hunter. 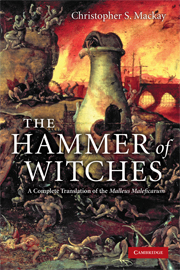 Written by Heinrich Kramer, an Inquisitor of the Catholic Church, it remained in print throughout the early modern period.  Last year, Cambridge’s Christopher Mackay translated an accurate version of the manual – the only complete English version available, and the most reliable.

THIS WEEKEND, Mackay will be featured on the National Geographic channel’s program about books used to hunt and try witches.  Check it out!

For the first time ever, an international investigation team joins forces to unravel the mysteries of the Malleus Maleficarum, or Hammer of Witches. Written in 1486, this infamous medieval manual changed the way the Western world saw evil. With detailed instructions on how to find, prosecute and punish witches, the Malleus inspired centuries of accusation and bloodshed on both sides of the Atlantic.

Ideas: Was there a hue and cry against witchcraft before the religious inquisitors got involved?

Mackay: It depends on what you mean by hue and cry. People believed in witchcraft, but they didn’t know about satanism. Whether you think you’re just some kind of wise woman and you’re able to say a few spells on some herbs is one thing. Thinking that that person is involved in a conspiracy with Satan is another thing. In terms of the big witch-hunting trials, they were inquisitions that were conducted by the authorities rather than things that happened out of the population. You wouldn’t have crowds of people like in “Frankenstein” with pitchforks and whatnot demanding that so-and-so were killed.