Written by: Marci A. Hamilton

Marci Hamilton of the Cardozo School of Law has joined forces with the Stop Abuse Campaign to promote the passage of the Child Victims Act of New York (A02596) before the end of the state’s session in June.

What does the bill actually say and where does the Times Editorial stand and how can you find out more on the Stop Abuse Campaign?

Via The New York Times

The Catholic Church is working against the interests of child abuse victims in state legislatures around the country. In recent weeks, lobbying by the church has blocked measures in Wisconsin, Arizona and Connecticut intended to widen the legal window for victims to file lawsuits against hidden predators.

We urge the New York State Legislature to rise above intense lobbying by the New York State Catholic Conference and Orthodox Jewish officials and pass the overdue Child Victims Act. Like a similar measure enacted in 2003 by California, it would create a one-time, one-year suspension of the statute of limitations for bringing civil lawsuits over the sexual abuse of children.

Once that window closes, people alleging abuse would have until age 28 to bring a claim. Current law sets the limit at 23 in most circumstances.

The measure recognizes that it typically takes many years before victims are ready to come forward. The measure also recognizes the Catholic Church’s history of intimidating victims and burying abuses in church files, creating a shroud of secrecy that extended in many cases until victims were in their 30s or older, well beyond existing time limits for prosecutions or civil lawsuits.

An earlier version of the bill passed the Assembly in 2006, 2007 and 2008, but the Senate, then under Republican control, refused to consider it. Assembly Speaker Sheldon Silver expresses strong support for the latest bill, amended to cover abuses by both religious and non- religious entities. But he is insistent that the Senate act first before requiring his members to cast another politically sensitive vote on the issue.

The Senate Codes Committee is set to consider the measure by mid-June. The committee’s chairman, Eric Schneiderman, Democrat of Manhattan, should work to ensure passage of the bill, which has safeguards against the filing of bogus claims.

The Catholic Church fears a wave of costly settlements and damage awards like those that followed California’s temporary lifting of the statute of limitations several years ago. Those concerns, and the difficulty of trying to judge decades-old accusations, are outweighed by the need to afford victims a measure of justice, the demands of public safety, and the injustice of rewarding any group for covering up sexual abuse of children. 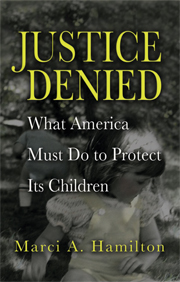 About the Author: Marci A. Hamilton

Marci A. Hamilton is author of God vs. the Gavel: The Perils of Extreme Religious Liberty (2007) and Justice Denied: What...