Bjorn Lomborg, author of the internationally acclaimed The Skeptical Environmentalist, talks about stumbling in the dark during EARTH HOUR. In March, nearly a billion people participated – switching off their lights for an hour to raise awareness of global warming. Though sweet and well-intentioned, Lomborg argues that this movement lacked power in more ways than one. Pun intended. 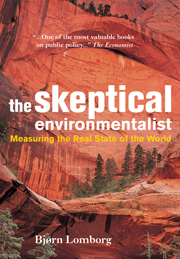 Via The Project Syndicate

Stumbling in the dark

As well-intentioned gestures go, Earth Hour is hard to beat. At the stroke of 8:30 p.m. on Saturday, March 27, nearly a billion people in more than 120 countries demonstrated their desire to do something about global warming by switching off their lights for an hour. In a show of official solidarity, the lights also went out at many of the planet’s most iconic landmarks, from the Opera House in Sydney to the Great Pyramid at Giza, not to mention Beijing’s Forbidden City, New York’s Empire State Building, London’s Big Ben, Paris’s Eiffel Tower, and the skylines of both Hong Kong and Las Vegas.

What ever else it may be, Earth Hour is surely one of the most successful publicity stunts ever dreamed up. First organized in Sydney, Australia, in 2007 by the local chapter of the World Wildlife Fund, its popularity and the level of participation (both individual and official) that generates has exploded in recent years – to the point that there is barely a corner of the earth that the campaign hasn’t touched. As Greg Bourne, CEO of World Wildlife Fund in Australia, put it: “We have everyone from Casablanca to the safari camps of Namibia and Tanzania taking part.”

But has Earth Hour actually done anything to halt – or even slow – global warming? Not so much.

The event’s popularity is not hard to fathom. Who but the most die-hard global-warming denier could resist the notion, as Earth Hour’s American website phrased it this year, that merely “by flipping off your lights on March 27 at 8:30 p.m. local time you will be making the switch to a cleaner, more secure nation”?

Needless to say, this was not quite the case. The main thing that anyone accomplished by turning off the lights at nighttime for an hour was to make it harder to see.

Keep reading at The Project Syndicate > > >