Cristina Mazzoni, author of the very cool, very new, She-Wolf: The Story of a Roman Icon, bids happy birthday to Rome – and explains how the she-wolf became a potent symbol over the course of the past 2,763 years. 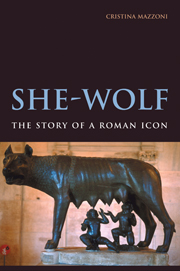 On April 21, Rome’s birthday is celebrated; this year, it is the city’s 2763rd. Tradition tells that, on this day in 753 bce, twin brothers Romulus and Remus—descendants of the Trojan refugee Aeneas—decided to found their own city. When Romulus built his walls on the Palatine Hill, Remus mocked and jumped over them; Romulus, provoked, killed him and remained Rome’s sole founder. It is from him that the Eternal City takes its name, as we all know. (But do we? According to another legend, it was a Trojan woman, Rhome, who named the city: with the help of her women friends, she forced the refugees she traveled with—including her own husband—to settle at the bend of the Tiber River by burning their ships.)

April 21 celebrates the founding of a city born of the second most famous fratricide in the west. But the artistic representations of Rome’s birth rarely focus on Romulus building his walls, or on Remus ridiculing them—much less on the fratricide itself. Rather, the birth of Rome is almost always illustrated with a scene that took place some eighteen years earlier: A wild she-wolf nursing twin baby boys. Legend says that a female wolf—lupa, in Latin—rescued Romulus and Remus from the Tiber River where they had been abandoned by their great uncle (he had usurped his brother’s throne and feared his descendants’ revenge). The she-wolf, sent by the twins’ father Mars, suckled the babies until they were found by a herdsman. Once grown, Romulus and Remus returned Alba Longa’s throne to its rightful king before going on to found their own city.

Some accounts claim that the she-wolf was actually a woman, a prostitute in fact, because lupa in Latin means both she-wolf and whore. This bond between females of the human and the lupine species—based on allegedly shared traits such as insatiable lust and an aggressively protective motherliness—has inspired representations of the Roman nurse such as the Lavazza coffee ad pictured above: The she-wolf is a voracious, sexy woman, as well as a fiercely maternal one.

Popular she-wolf images are typically inspired by the best-known she-wolf: the Lupa Capitolina. For centuries this bronze statue belonged to the pope and marked Rome as his; but since 1870 especially, she has symbolized Rome’s secular politics. The fascist regime saw in the beast the indomitable and nationalistic spirit of the Italian people (it was Mussolini who declared April 21 a national holiday); but the Capitoline She-Wolf is also the symbol of the A.S. Roma soccer team, traditionally working class and politically leftist.

A beast full of contradictions, the Roman lupa is enduring precisely because of her ability not only to tell a lengthy and complicated story, such as the foundation of Rome, within a simple and compelling image; but also because this nursing beast embodies, in this same, simple shape, multiple perspectives and ideals: the Roman she-wolf is a protective mother, jealous of her own, and yet her lust makes her sexually available to anyone—as the wolf-clad woman in the coffee ad attests; she represents the most public and unique of events, the birth of Rome, even as she performs a private and recurring act—breastfeeding; she is the indigenous totem of the Roman people, and yet the babies she feeds are of uncertain genealogy: milk rather than blood, is what makes Romans who they are.

The she-wolf’s ultimate meaning is as hard to hold onto as the legendary beast herself, who slips away into the forest just as soon as she is found.

About the Author: Cristina Mazzoni