The Dictionary of Irish Biography– more affectionately, DIB – is the most comprehensive and authoritative biographical reference work on Ireland. From James Ussher to James Joyce, St. Patrick to Patrick Pearse, St. Brigit to Maud Gonne MacBride, Maria Edgeworth to Elizabeth Bowen, Edward Carson to Bobby Sands, this indispensable resource outlines the careers at home and overseas of prominent men and women born in Ireland, north and south, and the noteworthy Irish careers of those born outside Ireland.

I had the chance to ask Bill a few questions about this adventure that he’s embarked on. Here’s what he had to say…

Q. What is your personal connection to the history of Ireland?

I was born in Dun Laoghaire, a seaside town south of Dublin and went to schools nearby in Killiney and Blackrock. My father wrote for what was then called Radio Éireann, the national broadcaster. He moved from New York to study as a graduate student at Trinity College Dublin, met my mother and never went back. My mother was from Bray, Co. Wicklow and had been a model and secretary before she married.

History was always one of my favorite subjects at school, although I never studied it academically – my university degrees are in English literature, law and media and communication studies. At national (public) school in Killiney, we studied Irish history from a book I still have: History of Ireland by D. Casserley, M.A. Dora Casserley was a school teacher in Dublin and someone I’d like to know more about (she’s not in the DIB). Much in her book has obviously been overtaken by modern scholarship, but it’s still impressively balanced and judicious. For years, what I knew of Irish history came from her. At secondary school, we were plunged into European history: it was a liberal and progressive school, and I think the aim of immersing us in continental history was to open up the world and steer away from the Ireland vs. England question which naturally dominated most Irish discussions of historical issues.

My father’s job ended at Radio Éireann and, like many Irish jobseekers in the 1960s, we moved to England, where I obtained a scholarship to Dulwich College, a private secondary school. When the Troubles erupted in Northern Ireland in the late 1960s, I was very aware of how all sides enlisted history in their support and became quite engaged with the way in people are invested in “their” history. When Gill & Macmillan published the 11-volume Gill History of Ireland (1972-75), I bought each volume as it came out. After that, I kept on reading. I moved to France in 1986 and the United States in 1993, although I’m back in Ireland two or three times a year, with each trip involving a trip to Hodges Figgis, Waterstone’s, and other Dublin booksellers to get the latest on Irish history.

Q. What sparked your interest in this series?

I became aware of it through the advance lives published in each issue of History Ireland. I was of course aware of other major national biographies, notably the Dictionary of National Biography for the UK, which naturally contains many Irish lives. I was curious about how a “national” biography of Ireland would be constituted, who would be included, who would be left out, and what the overall work would tell us about the country. My lovely consort Patricia – herself from Limerick – realized how interested I was in it and splurged on it for my Christmas present in 2009.

Q. How many biographies along are you?

As of March 11, I’ve just finished volume 1 (of 9). The hope was to read it all in 2010, which may still happen, but I fell behind when I succumbed to the flu for 4 weeks. I’ve taken a fairly mechanical approach: to read 28 pages a day and write about the lives that interest me in the day’s reading. It’s not a completely rigid system – on one day, the lives were so rich that I wrote two blogs – but it’s conceived so that I get to the end in a reasonable amount of time.

I’ve particularly enjoyed people I knew nothing about – photographers, naturalists, people who ended up in surprising parts of the world, and eccentrics. For instance, Achmet Borumborad, really Patrick Joyce, who wore a turban, opened Turkish baths in Dublin in the 18th century, curried favor with the local parliamentarians to raise money, but ended up getting a crowd of them roaring drunk. They all fell into the baths and Achmet’s patronage seeped away.

It’s unfair to speak of a “least favorite”. I’m not personally very interested in ecclesiastics, and discover that I have a quite visceral dislike of aristocrats. Generally, I don’t write about the people I’m not drawn towards. The most unpleasant person I’ve encountered so far has been Richard Annesley, 5th Baron Altham, 7th Viscount Valentia, 7th Baron Mountnorris and 6th Earl of Anglesea. He had a nephew who had a better claim on his many titles, so arranged for him to be sold into servitude in America. When the nephew got back home, the uncle tried to suborn witnesses to get him hanged. Later, he claimed he had no legal obligation to support his second wife, since he had entered into the marriage bigamously.

Q. What’s surprised you in your reading?

We’re a very young country – still only 90 years old – so most of our history long predates independence. From the 16th century on, there are a lot of entries for people who were involved either in subduing Ireland or in keeping it subdued afterwards. I’m struck by the sheer number of those who won the lottery of life by supporting the right side, obtaining lands and other benefits (confiscated from someone else, naturally) and establishing long dynasties of wealth, power, and influence.

I consider myself to be an anti-violence constitutional nationalist of a leftist persuasion – if I were voting in Ireland, it would be for the Labour party – and I’ve been surprised to find how often my atavistic hackles rise at yet another story of a person rewarded with 10,000 acres here or there in recognition of some service or other to the conquering power. I’m constantly questioning my own relationship to these stories and Irish history in general. 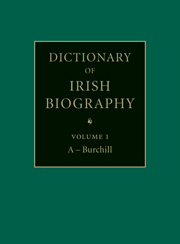