Editing the History of Canadian Literature 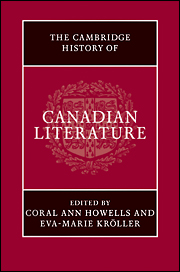 Manuela Costantino (MC): Why did Cambridge University Press decide to publish this book?

Sarah Stanton (SS): Cambridge decided to commission a History of Canadian Literature within its programme of Cambridge Histories (multi-author reference works) because we recognized that there was a clear library and institutional market for such a history, within Canada, but even more so within the USA (our largest single market for academic books of this kind) and Europe. That recognition was based on the self-evident distinction of Canadian writing, on the number of degree courses on the topic, and on the success of our recently published Cambridge Companion to Canadian Literature, a very different book (in level and extent) but tackling essentially the same subject area in abbreviated and student-friendly form. Is it appropriate to add that I myself am a keen reader of Canadian fiction? That of course should be no part of a tough-minded commercial decision to go ahead, but it added impetus to the decision-making process!

SS: Each is expert in the field, with somewhat different specialties—a good thing. Each had been highly efficient and successful volume editor of a previous Companion, Kröller on Canadian Literature and Howells on Margaret Atwood. They knew each other and thought they could work well together. They also represent different constituencies, Canada and the UK, and therefore markets, so would be likely to commission a wide range of contributors, which would appeal to readers globally. They are also lovely people to work with, with a keen sense of timetable and well connected within the field, therefore likely to attract the best authors and, eventually, reviewers.

MC: How did the fact that you are international and multilingual scholars affect your editing of the book?

Eva-Marie Kröller (EMK): As Sarah Stanton has already pointed out, we teach at British and Canadian universities respectively and so bring these two different perspectives into the picture. As well, we maintain strong professional and personal connections with our countries of origin, Australia and Germany, and were able to draw on a large network of international scholars of Canadian and Commonwealth literature. Finally, we are both francophiles, and one particularly enjoyable part of the collaboration was the ability to ruminate with a knowledgeable partner about the elusive meaning of a caption in Old French, for example.

Coral Ann Howells (CAH): I think our own international backgrounds as teachers and conference goers over many years have served us well as editors, because we have both gained a good working knowledge of who is doing what in Canadian and postcolonial studies. For a book like this dealing with such a mass of materials, we needed to be able to identify scholars with certain areas of expertise, and to find comparativists who are familiar with both anglophone and francophone literatures—something we have been able to do. We have contributors from Canada and the USA, also from Britain (both of whom are Australians), France, Germany, and Spain. To end on a trans-Canadian note, I might add that the chapter on fiction in French was written by two francophone scholars from Quebec, who teach at UBC, and the chapter on poetry in French by a scholar from Franco-Ontario, who teaches at the University of Ottawa.

MC: Did the fact that you are women play an important role in the editing of the volume?

Surgery and Selfhood in Early...

Surgery and Selfhood in Early...