We think of René Descartes as a French philosopher given that he was born in La Haye, France. Descartes, however, felt most at home among the Dutch.

In 1618 he joined the army of the Dutch commander, Maurice of Nassau and even long after leaving the military, he chose to reside in the United Provinces of the Netherlands. His return to France in 1620 ended in 1623 with a pilgrimage to Italy, which Descartes undertook as thanks for a series of dreams (he interpreted these as divine revelations of his future path as a philosopher). Descartes returned to France again in 1623 but finally left for good in 1628. Frustrated with the social obligations that life in Paris imposed on him, Descartes took refuge in the Dutch Republic whose people he praised for not prying into his business. 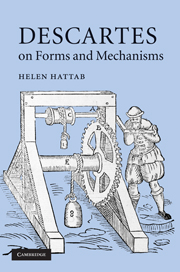 His first stop in the Netherlands was the University of Franeker, in the Northernmost province of Friesland. Descartes was, at this time, engaged in mathematical sciences, such as optics and astronomy, and aimed to gather observational data concerning parhelia and other astronomical phenomena. Believing Adrianus Metius, Professor of Mathematics at the University, to be related to the Metius who had invented the telescope Descartes hoped that, with his assistance, he would make progress in his astronomical observations. When this turned out to be a case of mistaken identity, Descartes tried to entice the French lens grinder, Jean Ferrier, to join him in Franeker, even promising him a cook who could prepare French food!

When this plan failed, Descartes moved to Leiden, registering as a student at the University of Leiden on June 26, 1630 (probably, in order to be able to use its library). He was, in all likelihood, attracted to Leiden because Jacob Golius, Professor of Mathematics at the University had just discovered an Arabic manuscript containing the lost books of Apollonius of Perga’s Conics. Golius became a lifelong friend, even defending Descartes against accusations that he had stolen the law of refraction from Willebrord Snel rather than discovering it independently. In 1640, Descartes resided in a house located opposite Golius’ on the Prinsengracht, and in 1641, 1643 and 1649 he lived in Castle Endegeest just outside of Leiden (both buildings are still there – the Castle is now a psychiatric institution).

Henricus Reneri, another close Dutch friend of Descartes’, taught Natural Philosophy (which back then included physics) in Deventer. Between 1631 and 1633 Descartes moved back and forth between Amsterdam and Deventer, and in 1635 he followed Reneri to his new teaching post in Utrecht. At this time, Descartes was working on a treatise (published posthumously under the title Treatise on Light or The World) that laid out his cosmology and physics. Constantijn Huygens urged him to publish it, but Descartes abandoned this plan upon hearing of the Inquisition’s condemnation of Galileo Galilei. Both Huygens and Reneri continued to pressure Descartes to publish the fruits of his new scientific method. Huygens suggested that he publish his Dioptrics and Reneri, who needed a teaching text for his courses in natural philosophy, requested that he publish his Meteorology. In 1637 Descartes published both scientific essays and hastily added a Preface plus his newly completed Geometry. This hodge-podge of his scientific writings was published under the title Discourse on the Method.

Descartes’ relations with the Dutch began to sour when his follower, and Professor of Medicine and Botany at the University of Utrecht, Henricus Regius, held a public disputation in 1641 in which he defended the controversial thesis that the human mind and human body formed an accidental not a substantial union.  In his book Descartes and the Dutch, Theo Verbeek reports that, probably in an effort to protect Descartes from legal charges by the conservative Calvinist rector of the university, Gijsbert Voetius, Regius claimed to take his thesis from the deceased Dutch atomist philosopher, David Gorlaeus rather than from Descartes. Unfortunately, this only served to fan the flames of Voetius’ wrath as Gorlaeus had been an Arminian sympathizer when the more liberal Arminians clashed with orthodox Calvinists during Voetius’ days as a theology student in Leiden.  Voetius could now link Descartes’ teachings with the Socinian heresy via a spurious association with Gorlaeus.  Hence Cartesianism came to be associated with heresies that threatened not just the standard Aristotelian philosophy taught at university during this time, but with the entire religio-socio-politcal order of the young Dutch Republic.

The ensuing legal and intellectual battles were probably a factor in Descartes’s decision to leave the Netherlands for a post at the court of Queen Christina of Sweden in 1649.  Unfortunately, he died shortly thereafter on February 11, 1650 in Stockholm.  Descartes’ corpse then made a long journey back to Paris – but this is a story for another time.

Note: Yes, I realize that the front-page image is of Descartes in Sweden. -ed

About the Author: Helen Hattab

Helen Hattab is author of Descartes on Forms and Mechanisms (2012)...