The Sky This Winter

A couple of weeks ago, I wrote about holiday gifts for potential stargazers. I argued against buying a telescope as a first step, and instead encouraged people to begin with the naked eye or binoculars. Now I’d like to describe some of the objects in the nighttime sky that you can see right now and in the coming months, to help anyone who might take me up on that advice.

Amateur astronomers divide the sky into two distinct regions: the Solar System and the ‘deep sky’. Objects in the Solar System – the sun, the moon, the planets, comets, asteroids, and lots of smaller things – are much closer to us than the targets of the deep sky: stars, star clusters, nebulae (clouds of interstellar gas and/or dust), and galaxies. Because of this, Solar System objects, as they orbit the sun, move across the fields of constellations. The constellations (and all the objects contained within them) also change as the earth itself goes around the sun, but the same constellations are in the sky at the same time every year. If I were writing only about the deep sky, I could have called this post ‘The Sky Every Winter’, but there are some bright planets in the sky right now, and they won’t be in the same positions a year from now.

Right now, in mid-December, if you go outside between just after sunset until around 9:00 pm, and look south of where the sun actually went down, you’ll see a very bright ‘star’ that is actually the planet Jupiter. It will be getting lower and lower in the sky each night as the earth’s orbit makes Jupiter appear closer to the sun in our sky. By mid-February, it will set so soon after the sun that we won’t be able to see it anymore (several weeks later, it will be visible again in the early morning, as it begins to rise before the sun.)

Jupiter is huge. Even through a pair of modest binoculars, it shows as a tiny disc, although it is 500 million miles away. Through those same binoculars, its four largest moons (Io, Europa, Ganymede, and Callisto) show as tiny specks in a line near the planet. The photo shows just three of the moons, because one was behind Jupiter at the time. Binoculars won’t show the detail seen here on Jupiter itself, mostly because it will be too bright, but it will also look much smaller. 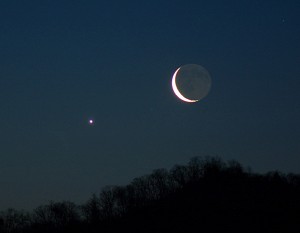 On December 20th and 21st of this year, Jupiter will look especially striking, since it will be accompanied by the crescent moon. The sun, moon, and planets all seem to travel along or near a line around our sky (since we are all contained in the flat disc of the Solar System, this makes sense) called the ecliptic. Since the moon completes a circle around this line once a month, it often comes near any planets that happen to be visible. If conditions are right, it sometimes even passes in front of them. December 21st is the winter solstice, the longest night of the year. If skies are clear, take a look to the south just after sunset, when there’s still some blue in the sky. It will look something like this photo I took of the crescent moon near the planet Venus last spring.

Mars is rising earlier each night this month. Right now it comes up in the east around 8:30 pm, but by mid-January, it will rise just after sunset, and will be the bright, yellowish-orange ‘star’ that dominates the eastern sky. Mars is a small planet, and details on its surface are hard to see, even through a powerful telescope. On January second, 2010, a nearly-full moon will rise around the same time as Mars, and they’ll cross the sky together. On January 29th, the same thing will happen, after the moon completes another orbit of the 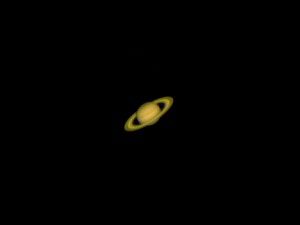 earth; and this time, the star cluster M44, (the ‘beehive’) will be in the background. But it won’t be easy to see, since the moon will be so bright. If you go out in the evening a few nights later, the moon will not have risen yet, and Mars will look great next to M44 through a pair of binoculars!

If you stay up later right now (mid-December), you can see Saturn rise at about 1:00 am. By mid-January, it will rise two hours earlier, and by mid-February, it will be fairly high in the southeast by 11:00 pm, and will continue rising earlier each night. Saturn is nearly twice as far away as Jupiter, and not as large, but it still appears as a bright, yellow ‘star’ in our sky. Binoculars cannot show its famous rings, but they are visible through even a small telescope at about 45x magnification. (I’m including a telescope view of it here, even though it may be cheating to do so in this article, because it’s one of the best things to see through a small scope.)

No description of the winter sky would be complete with out the inclusion of the constellation Orion, the Hunter. It’s the brightest constellation in the entire sky, and it rises completely by about 7:00 pm by mid-December. By mid-January, it is high in the sky, due south, by 10:00 pm. It’s a beautiful sight with the naked eye, and the Great Orion Nebula, seen in the Hunter’s ‘sword’, shows wispy, gray detail through binoculars. The nebula is a region of gas and dust where bright, new stars are forming. 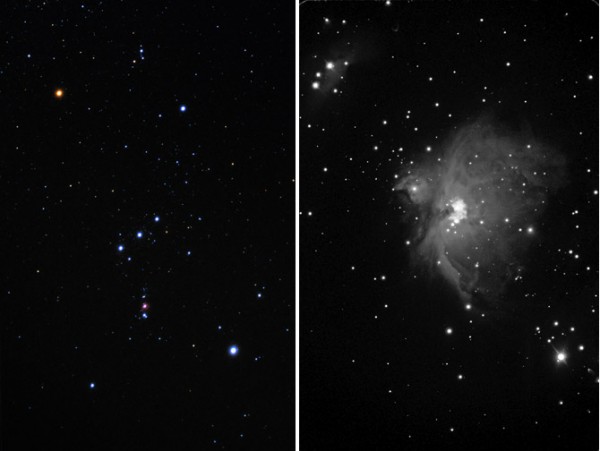 Orion and its famous nebula

This is just a sampling of what you might see if you go outside this winter and look up at the night. To find more, try using the Interactive Sky Chart at the Sky and Telescope website. You’ll need to register, and enter your location, but once you do, you’ll be able to return whenever you like. You can find out what will be in your sky at any given minute, hour, day, month, or even year. And, if you’re anything like me, the more you go out and look at the actual nighttime sky, the more you’ll want to!