A Nazi at Harvard

In Anthony Grafton’s review of The Third Reich in the Ivory Tower for the NYRBlog, the indictment and complexities of US-German ties in the buildup to World War II. 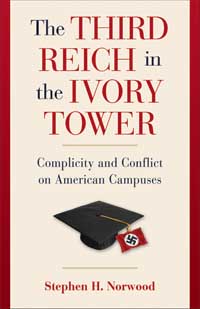 In 1934, the Harvard class of 1909 held its 25th reunion—then as now an occasion for members of the American elite to parade in public and celebrate their achievements. But this year the star attraction was a German: Ernst “Putzi” Hanfstaengl, the son of a Munich art dealer and publisher who had joined the Nazi movement and enjoyed personal access to Hitler (Hitler liked hearing him play the piano, as had his Harvard classmates, for whom he composed football fight songs). In the early 1930s he served as foreign press chief for the Nazi party.

When Hanfstaengl’s plan to attend the reunion became known, a scandal blew up. He declined to serve as an officer of his class, but he came, visited the estates of wealthy Harvard men around Boston, and took tea at the house of the current president, James Conant, who would later serve as American high commissioner, and still later ambassador, in postwar Germany.

Liberal journalists and politicians, especially in New York, denounced the Nazis and dwelled on Hanfstaengl’s support of their policies. A rabbi confronted him, two girls chained themselves to railings in Harvard Yard, and a few students from MIT protested and were arrested. But Harvard’s members, old and young, responded to such critics with striking solidarity. The Crimson denounced the demonstrators as “extremely childish.” Conant went ahead with plans to send the mathematics professor George Birkhoff, a staunch anti-Semite, as an official representative of the university to the 1936 anniversary celebration at the University of Heidelberg—an institution that, purged of its Jews, taught “German physics.”

Stephen Norwood, a distinguished American Jewish historian, tells these grim stories in a lucid, well-informed book: The Third Reich in the Ivory Tower. Many of the richest and oldest colleges and universities in the United States showed less understanding of Nazism than newspaper columnists like Heywood Broun (who, to be fair, also attended Harvard, where he met John Reed and Alan Seeger).

In some cases, university presidents did more than send greetings to the odd dictator. Nicholas Murray Butler of Columbia went back and forth to Europe on German ships, sent representatives to the big German university festivals—and expelled students and fired professors who protested. Worse still, he allowed Columbia’s Italian Academy to become a center of Fascist propaganda. Meanwhile the Seven Sisters welcomed Nazi exchange students and sent their own young women off to witness the wonders of German prosperity and order at the University of Munich.

At times, Norwood offers an indictment—a justified indictment—rather than a history. In his first chapter, he argues at length that any sentient American should have known what the Nazis stood for. He has a point. But it’s one thing to show that Conant and Butler came late to the war against Fascism, as they surely did (in 1940, Conant was appointed Chairman of the National Defense Research Committee, which oversaw the Manhattan project); quite another to explain why they were so blind and deaf.

Keep reading at the NYRBlog >>