As the Obama administration calls for more transparency in government, NextGov interviews Archon Fung, author of Full Disclosure about what government (and non-government) transparency really means.

Nextgov Executive Editor Allan Holmes interviewed Fung in August, shortly after Fung returned from Washington, where he participated in a three-day workshop with federal managers, administration officials, democracy groups, scholars and others to discuss ways to involve citizens more in government. The following are edited excerpts:

Nextgov: How do you define transparency? 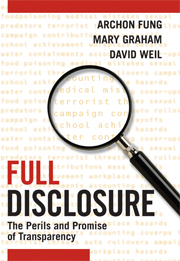 Fung: My definition is quite a bit different from the conventional wisdom about transparency. A transparency system is designed to allow people to improve the quality of decisions they make in some way, shape or form, and it enables them to improve their decisions to reduce the risks they face or to protect their interests. Some of those decisions are about political accountability but some are in private life, like what food to buy or what doctor to go to.

Fung: Yes. Most of the people working and thinking about transparency are thinking about transparency of government. There’s an underlying presumption there that is a little bit of a mistake. The underlying presumption is that of all the organizations in society, government is the one that creates the most risks and most threats to citizens’ well-being and interests. Part of that is right. Government does do a lot of things that create risks for people and harm them, so it is important for government organizations to be transparent so people can try to know what the risks are and try to do things that control and minimize the risk.

But there are private sector organizations out there that make your food or cars or provide social services or health care that also create huge risks, and upon whom individuals depend on enormously for their well-being. I think the same rational for governmental transparency applies even more to making these activities and actions for all these other organizations more transparent.