On September 15, 2009 the UN Human Rights Council published a detailed and shocking report about Israeli and Hamas conduct during the Gaza War. Israel carried the brunt of the criticism. Did Israel violate international law or establish new norms for fighting guerrillas? The answer is, probably both. 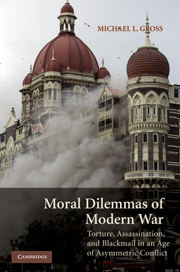 The report documents the deaths of about 1200 Palestinians and extensive destruction of local infrastructures. Casualties comprise 4 roughly equal groups: militants, police, civilians who supported Hamas and innocent civilians uninvolved in the fighting. About militants, there is no debate. They were legitimate military targets. Of the other deaths, how many were justified and how many were not?

Is it permissible to kill 300 police officers?

This depends on what they did. The UN claims the officers were not fulfilling a military role. Israel denies this, asserts that the police were nothing but a paramilitary force but has yet to offer any details. To its detriment, the Israeli government has refused to cooperate with the UN mission.  In the absence of any Israeli response, the UN charge must stand. If, however, the police officers were an adjunct military force then they are as vulnerable as any militant.

Is it permissible to kill 300 civilians who support the fighting?

Under the standing law of armed conflict the answer is usually no. Unless a civilian fires a missile or transports war materiel it is forbidden to harm him. Protected civilians also include members of the Hamas political wing who raise money, work in schools or provide welfare services. Civilians who provide funds or logistical support or distribute propaganda are also immune from attack.

In asymmetric war, however, there is reason to think about this differently. Guerrillas cannot hope to fight without the help of some civilians and the state army opposing them cannot hope to win without harming the same civilians. This is Israel’s position. Anyone supporting Hamas in a substantial way, even if he does not bear arms, is a legitimate target.  This position is acceptable with two important caveats. “Harming” does not mean “killing.” Full-fledged combatants are vulnerable to lethal harm but most civilians who support a war are not. They may be disabled by nonlethal means or subject to arrest, incarceration or even exile. At the same time, a state striking at these targets must provide evidence about their activities. The government of Israel has done neither.

Is it permissible to kill 300 innocent civilians?

Here, the answer depends upon how they are killed. The law of war permits reasonable or proportionate harm to civilians as long as the harm is collateral, that is, unintended. How much harm is reasonable?  This is debatable but it seems clear that in asymmetric war more civilians will be exposed to collateral harm than in a regular war. This is because combatants fight without uniforms and civilians are close to the fighting even if they do not participate. For this reason, the scope of permissible, proportionate harm expands in asymmetric war. This would allow Israel some room to maneuver before the harm it brings on innocent civilians becomes disproportionate. None of this, however, allows Israel to harm civilians intentionally.

Intentional harm to civilians and massive destruction of civilian infrastructures is at the center of the UN report. Investigators take aim at the “Dahiya” doctrine of warfare, so named for the Shiite quarter of Beirut that was leveled during the Second Lebanon War. This is the doctrine of disproportionate force. Its recommends attacking civilians directly to 1) demoralize the civilian population 2) pressure guerrillas to cease fighting 3) deter guerrillas from future fighting.  The doctrine of disproportionate force makes a mockery of noncombatant immunity. No state or nonstate army can be allowed to attack innocent civilians to further its war aims any more than it may resort to chemical and biological weapons to do so.

The Gaza War poses a challenge for both the Human Rights Council and the government of Israel. The Human Rights Council must recognize that there are times when it is legitimate to attack police officers, disable civilian combatants and harm civilians indirectly without bringing charges of disproportionate harm. These are part of the new norms of asymmetric warfare. The government of Israel, on the other hand, must recognize that the Dahiya doctrine does not belong in modern warfare. It harms civilians gratuitously and sets no limits for soldiers in the field. It is a blatant violation of humanitarian law and Israel should renounce it.

Critics will argue that I have created a slippery slope. By expanding the range of civilian targets to include civilian combatants and by permitting a loose interpretation of proportionality, I have opened the door to the very Dahiya doctrine that Israel has embraced. For this reason, Israel must cooperate freely with the UN and other commissions of inquiry. They must describe the activities of Hamas police and other civilians who supported the war effort but at the same time they must distance themselves from the intentional killing of innocent civilians. Otherwise, the critics are right.

About the Author: Michael L. Gross

Michael L. Gross is chair of the Department of International Relations at the University of Haifa, Israel. He is the author of Moral Dilemmas of Modern War: Torture, Assassination and Blackmail in an Age of Asymmetric Con...