The New York Times today interviewed psychologists and therapists about the jarring changes in their daily practices in the wake of the September 11 attacks. 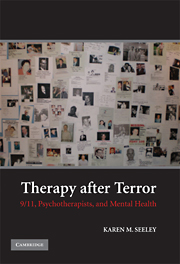 “I always try to leave some space in my practice for nice, normal neurotic people, so that my whole day isn’t just death and dying,” Dr. Kane said. That was not possible after the Sept. 11, 2001, attack. “It was death, day in and day out,” she said. “I would be in the office from 8 in the morning till 8 at night dealing with dead people and bereaved people — all day long for more than a year.”

The piece featured an interview with author Karen Seeley:

“Sept. 11 was very quickly framed as a mental health emergency,” said Karen M. Seeley, a psychotherapist and a professor of psychological anthropology at Columbia University. But most therapists, trained in the main to help people one at a time, were not ready for this “collective catastrophe,” Dr. Seeley said. “For everybody, it was unprecedented. Firefighters weren’t prepared. Police weren’t prepared. Neither were therapists.”

Dr. Seeley spent the better part of two years conducting in-depth interviews with 35 therapists who had worked closely with 9/11 survivors and families. They formed the basis for a book called Therapy After Terror: 9/11, Psychotherapists and Mental Health and published last year by Cambridge University Press.

What she learned was that the pros in her field not only were ill prepared for the disaster but also became overwhelmed by the horrific stories that they heard and by their own terrorism-induced anxieties. Obviously, victims’ families suffered most. But all New Yorkers were traumatized to some degree. Their city had been attacked. As the country entered a constant state of war, they were told by political leaders to be afraid. Many were.

Being human, therapists often succumbed to the same fears. Dr. Seeley called it “simultaneous trauma” — “an extremely rare clinical situation in which therapists were deeply shaken by the same catastrophic events that injured the patients they were treating.”

Read the full story at the New York Times >>