The Ideas section of the Boston Globe recently interviewed our own Christopher Mackay. Mackay translated the only accurate version of the highly influential medieval witch-hunting manual – Malleus Maleficium (The Hammer of Witches). We released it as a scholarly dual-language reference set, and now as an English-only paperback. 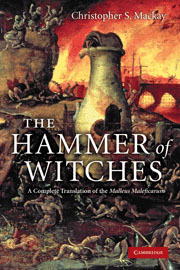 Continue Reading at the Boston Globe >>