A Route to Sensible Health Care?

Economist Earl Grinols writes for the Galen Institute, spelling out how officials have failed to make important economic distinctions in the current health care debate. Grinols is author of Health Care for Us All. 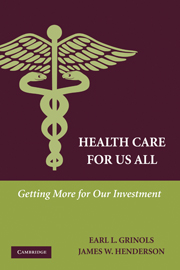 Americans have expressed their displeasure with House 3200 and the Senate health care bill because both contain bad economics and bad ideas.  Why does extending good insurance coverage to all Americans require socializing American medicine, reducing doctors to having the state look over their shoulders, and telling our seniors that the nature of their care is conditional on the number of quality life years remaining to them?

Economists such as myself are dismayed at the bills put forward.  Congress has had years to consider health care yet still does not show understanding in its legislation of even the most basic features of the subject.  For example, the distinction between health insurance, which insures against treatable events in the coming coverage year, and reclassification risk insurance (sometimes called health status insurance), which insures against a change in the insured’s risk classification that carries over into later periods seems to have been ignored by the writers.  Nobel laureate Kenneth Arrow wrote about this distinction in 1963.  How could Congress fail to understand it in 2009?  The re-insurance mechanism that supports insureds’ ability to change their health insurance company at any time and pay no more than the standard premiums paid by others of their same sex and age could also have been adopted by the House or Senate.  The Senate also shows ignorance of the importance of homogeneous risk pooling when it requires by law that men and women must be grouped together for insurance.  Why should a man pay for breast cancer or a woman for prostate cancer?  What if the treatment costs are radically different?  Are teen-age women required to pay the same for car insurance as teen-age men who are known to have more accidents?

Keep reading at the Galen Institute >>

About the Author: Earl L. Grinols

Earl Grinols is co-author of Health Care for Us All: Getting More for Our Investment (2009) and View the Author profile >