In the DNA of my family the science gene went astray. My father was a civil engineer who designed suburban roadways, but all I inherited from him was an excellent sense of direction. My cousin teaches high school science but I’ve a sneaking suspicion it’s because he likes to blow things up. I had somehow managed to avoid the nitty-gritty of most things scientific until I came to work for Cambridge.

Cambridge is widely renowned for the areas we publish in and especially so in science circles for our Physics list.Now, in my world, Physics strikes me as being particularly mind-boggling … really long complicated sounding words and theorems, some of which are preceded by “nuclear”, which being a child of the Cold War, tends to set off alarm bells in my head. Fortunately our editors provide excellent notes for help in selling these titles, because alas, most of my buyers are no more knowledgeable than I. It is sometimes a struggle to know where to place our excellent list, but a few months ago I discovered the mother lode … or perhaps I should say it discovered me. 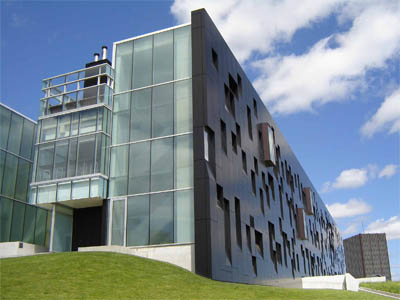 The Perimeter Institute for Theoretical Physics (aka the PI) is the brainchild of Mike Lazaridis, a co-founder of Research in Motion (RIM). For those of you unfamiliar with RIM … the Blackberry in your hand … you can thank Mr. Lazaridis and his colleagues for that. The Perimeter is based in Waterloo, Ontario, a mid-sized city about 100 km west of Toronto. It is home to two fine universities, an extraordinarily beautiful Glass & Clay museum, and surrounded by bountiful farmlands, settled years ago by Mennonites. At first glance, it is not where you expect to find some of the most brilliant scientific minds of our age. But in 2001, the PI opened its doors, welcoming physicists from around the world, involved in all matters of research in foundational theoretical physics. Additionally, the Institute provides outreach and programs to the general public and students, both local and international, as part of its mandate to explain the intricacies of their research to non-science folks like me. The current director is esteemed scientist Dr. Neil Turok, and among its distinguished scholars are well known researchers such as Stephen Hawking, Lee Smolin and Leonard Susskind

Recently the PI hired a professional librarian to take charge of its collection, honing and expanding the selection with the assistance of faculty members. She contacted me in early winter with an initial list of must-have titles, and we have been rolling along merrily ever since. A few weeks ago, while in town seeing local booksellers, I took the opportunity to visit the PI to check out this hotbed of scientific inquiry. And it is truly a wondrous place. Housed in an award-winning building, set in a park, it features soaring open spaces, a lecture theatre, offices and conversation nooks (complete with blackboards for inspiration!). The library is a multi-level space, light-filled and cheery, with fireplace, study carrels, and most exciting: lots of books!Why exciting? Because it heartens me to know that an institute of learning and research, founded by a man whose work has transformed the way we communicate, believes that the printed, bound word is still an important and necessary method for exposing, explaining and directing knowledge. As a salesperson it thrills me to know that I have found a good home for books that are unintelligible to me, but inspire and provoke others to discovery.