Last week, Paul Kinzer answered my questions about planetary impacts, notably the recent one involving Jupiter. Last night, he went out with his own modest amateur astronomer’s kit to see if he could snap some pictures himself. Here’s what he found.

If you haven’t yet heard, an Australian amateur astronomer named Anthony Wesley took images through his 14.5 inch Newtonian reflector of what turned out to be an impact mark on the planet Jupiter. Something fairly large had smacked into the planet shortly before he started taking the video frames that he would later combine into a single image.

Wesley knows a lot about Jupiter, and this dark mark didn’t fit with what he knew, so he wondered if it might be similar to the impact marks left on Jupiter after the comet Shoemaker-Levy 9 hit it almost exactly 15 years ago. He posted the image on the Internet and also approached professional astronomers, who, of course, have access to much larger telescopes. Now these huge scopes (including the Keck in Hawaii, and the Hubble) have confirmed that it was — and still is — the mark of something that struck the planet. When we look at Jupiter, we’re actually looking at the highest cloud tops. This thing, a comet or an asteroid, was large enough to throw stuff up from down below so that a dark spot the size of Mars was formed.

The very cool thing, at least to me, is that the mark has lasted long enough for me to get images of it myself. This could be a very rare occurrence, or maybe not, since it’s the second we’ve witnessed in 15 years. But the odds of me having clear weather the next time it happens are pretty dim, I’ll bet. As it was, the ‘seeing’ was not very good at all: stars were twinkly, and Jupiter roiled like it was in boiling water. Where I live, at 44 degrees north of the equator, Jupiter is at a point in its orbit where it never gets much more than about 30 degrees above the horizon, meaning its light passes diagonally through a lot of air, making imaging even more difficult. 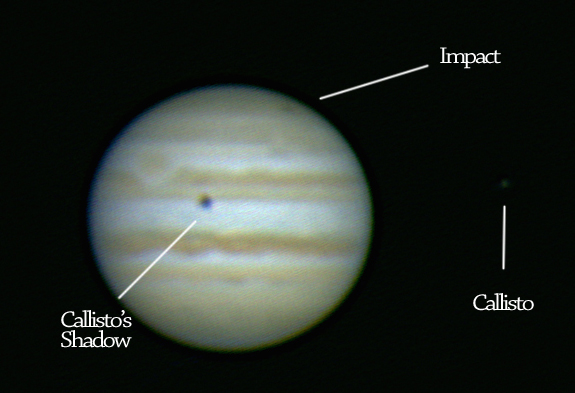 This is why astrophotographers use webcams, or similar cameras made especially for the purpose of astro-photos (at 3 to 20 times the cost of a webcam). You take many frames, several hundred at least, and use software to automatically align, stack, and combine the frames into a single, sharp image. But steady skies are needed for really sharp shots, and I’m happy to have gotten one this good. It was also very humid; I could see mist under the evil streetlights. Of course, I also have a pretty modest scope (a homemade 10 inch reflector, with purchased mirrors) and camera for this kind of thing.

I started setting up my scope in our driveway at about 1:45 am, and was imaging by 3:10 (8:10 Universal Time for you astronomers). The dark mark was supposed to be facing directly toward Earth at about 4:15, and this would have been the time it would be most noticeable, but Jupiter was highest right about the time I started imaging, and as it got lower in the sky, its light had to travel through more and more unsteady atmosphere. So, as it happens, this image comes from the very first video file I recorded. I kept doing more until it started getting light at around 4:30, and packed up as the birds were starting to sing. It was nice, in a way, since it meant I didn’t have trouble seeing any of my stuff.

This image is pleasing to me for other reasons, too. The very dark spot close to the center of the image is not the impact feature; it’s the shadow of the largest moon in the Solar System: Callisto. It’s bigger than the planet Mercury! You can see the moon itself off to the right of Jupiter. It looks small, but only because it is quite dark, and doesn’t reflect much sunlight. The shadow shows a closer approximation of its true size. The Great Red Spot is also visible, above and to the left of Callisto’s shadow. The dark spot itself is much more subtle: it’s just rotating into view on the extreme upper right of Jupiter (at about the 1:00 position). But, hey, it’s there!