I have only recently started playing around with taking astrophotos through my Digital SLR (single lens reflex) camera, but, even with my limited experience, I’m very pleased with the results. If you have a DSLR, and own or have access to a telescope with a 1.25” focuser and a motorized equatorial mount, you are almost ready to start imaging yourself. A suitable telescope and mount can be purchased for under $300 (see the photo below). 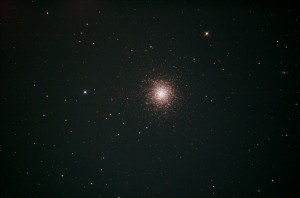 What makes digital imaging easier than astrophotography with film is that, rather than leaving the shutter open for several minutes or longer, many shorter images can be ‘stacked’ together to get similar results. This makes things easier because, as the image is being exposed, the Earth is turning. In order to get nice, round images of stars, you need to match your telescope’s motion to that of the spinning Earth. With film, you needed to actively guide the telescope during the long exposure, but with a digital camera, exposures as short as 30 seconds can be added together to produce images like this one of M13, the bright Globular Cluster in the constellation Hercules.

This image is a combination of 39 thirty-second exposures, taken through a Nikon D50 DSLR, which was inserted into the focuser of my 10 inch (254mm) f/4.7 reflector (focal length: 1200mm). There was no eyepiece in the scope, and no lens on the camera. This is called ‘prime focus’ astrophotography. An adapter is needed to put the camera and focuser together, but they are not very expensive, and just about any astronomy dealer will sell them for just about any camera. 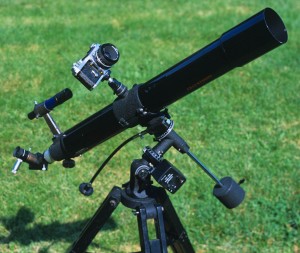 Here, the DSLR is piggy-backed on the scope

Because I used a scope with a fairly large mirror, and a fairly short focal length (for a telescope), the image is quite bright. A smaller scope would not produce the same result. But if you mount your camera in a different way, you can use a ‘fast’ camera lens to take wider angle shots of constellations and other larger swaths of sky, even on a small scope — or with no scope at all! [see right] You attach the camera, with lens, to the top of the telescope (or directly to the equatorial mount), and use what is called, appropriately enough, the ‘piggy back’ technique. A single thirty-second image will show a fair amount of detail, and several images can also be stacked, to show dimmer stars and other objects.

One aspect of digital astrophotography that is not required of film is the taking of ‘dark frames’. Digital camera sensors produce ‘noise’, and this noise can be removed. After you take several images of an object, you then put the lens cap on the camera lens (for piggy-backing), or cover the end of your scope (for prime focus imaging), and take several more images, at the same settings as the ‘light frames’. You then use processing software, which will align and stack the light frames, and remove the noise by removing the information shown in the dark frames.

The photo below is another prime focus image, using the same set-up I described above. This is M51, the Whirlpool Galaxy, in the constellation Canes Venatici (the Hunting Dogs), just below the Big Dipper. This time, because the galaxy is quite dim, I had to ‘guide’ the telescope, using a small telescope piggy-backing on the larger one. I kept a star centered, in a special eyepiece with illuminated crosshairs, in the smaller scope, by using the hand controller of my motorized mount. This was the way to take nearly all photos on film. But even this is simpler now with DSLRs: instead of a single 30-minute exposure, this is a combination of six five-minute exposures. Also, one of the best things about digital imaging is that you can see the results right away. I actually took 8 shots, but my guiding was off too much on two of them, so I threw them away. On a single film image, I would not have known that my shot was ruined until I got the film developed. 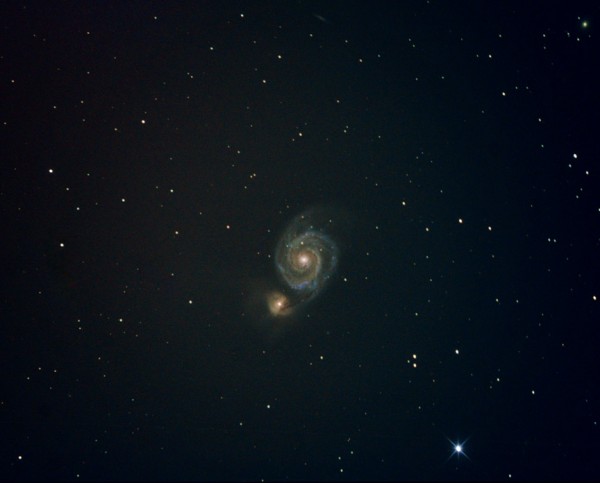