It’s everywhere, and I know I’m not the only one who gets peeved when they see it. 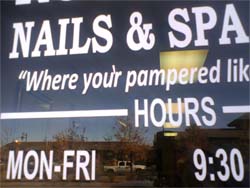 “Employee’s Only”
“Your on the subway?”
“Man, I really need to loose some weight!”

Now, I’ve been called a Grammar Nazi many times over, but I do believe there is a clear difference between a person truly deserving of that unfortunate title and others, like myself, who believe that some rules should just be common knowledge for native speakers of the English language. Humans make mistakes; this is only natural. But let’s distinguish between the honest and benign misspellings that we all make, and some of the atrocities we encounter on a daily basis. So where do we draw the line between unnecessary judgment and that which is (should be) just plain obvious?

A Grammar Nazi is, in my opinion, a harsh term that should only be used sparingly, and when describing a singular type of individual. This person overlooks any semblance of argument and substance in a written text and makes an obvious, condescending effort to point out each and every little error one could possibly make. This is highly unhelpful and just plain obnoxious, and I make every effort not to be one of those people, because I realize that I, like everyone else, make mistakes when it comes to writing. But I can’t help but feel a little part of my soul die every time I

drive past a store that advertises “Puppy’s for Sale”. What’s a “for sale”, who is Puppy, and why are you advertising that it belongs to him/her?

In defense of these errors, many argue that it does not matter whether the construction and spelling of sentences and phrases is correct, as long as the general message is made clear. I am certainly in agreement with this justification, but to a certain point. If a person spits out a work of intellectual genius rampant with superfluous punctuation and dangling participles, these mistakes are clearly secondary to the core of what is being said. Content over technicality should be the rule of thumb.

However, when it comes to billboards and simple signs that require very little thought to construct, a little editing goes a long way. When these mistakes are constantly present everywhere we go, they reinforce our knowledge for the worse. We begin to forget the difference in meaning between “they’re”, “their” and “there”. Apostrophes become either obsolete due to laziness, or grossly overused for every word ending in the letter S. These are the differences we learn in the second grade; I don’t think it would hurt to use that knowledge. If it’s going to be in our face, it better be right.

Steve of current.com has a great video series on this issue: