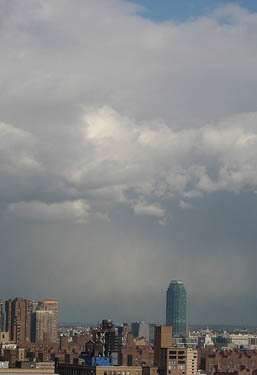 I was at my desk last week when I heard a Senior Editor mutter, “And the clouds roll in from New Jersey.” Since there are no windows by my cubicle, I began to imagine the scene outside.

Dark clouds hover above the towers in Jersey and along the edge of the Palisades. They billow and grow, as the moment of utmost tension nears. Then, as if unbound by time, they are upon the city.

Time should have a place though. Perhaps it slows as the clouds sweep across the Hudson. But they would not “sweep”. Flat, dreary clouds sweep. These clouds roll forth, collapsing continually from their pinnacle, before rising again and growing ever higher.

A few minutes later, I entered a conference room, sat, and looked out the window. To my surprise, mists shrouded the city in a shade of muted gray. The meeting began, yet I remained transfixed by the shifting haze beyond the window. My daydream faded and my mind was tranquil.

One evening this past January, I stood before a wall of glass on the seventeenth floor of a Midtown tower. Beyond the window panes, I saw a cube of light suspended in the night sky. Its five faint walls floated like thin, glossy sheets of vapor, and composed a dim reflection of the space I stood in. As I shifted my focus from the cube to the fuzzy dots of light from the other towers, I noticed several snowflakes in the air. They swirled about each other, like pixie dust carried by a breeze.

My heart’s pace slowed and my shoulders loosened. I felt compressed into myself, yet at the same time, adrift in the black, beyond myself. I get this same sensation when I sit in an armchair and listen to rain brush a window or pummel a roof. Perhaps we sense this duality when we slip into a space between places: spaces that we can not inhabit physically. When I looked out into the gray last week, unable to identify the streaks of rain that fell, I felt both compressed and adrift.

The sensation lasted a moment, and then I focused on the meeting.

Although meteorologists expect the wet weather of June to persist, it hasn’t rained for the past week. On the next wet workday however, I’ll try and manage a moment before a window, and hopefully slip into the void between here and there.