The Buzz of BEA 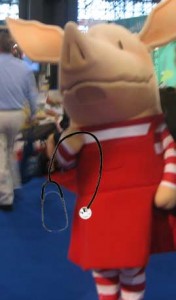 Two weeks ago, a fellow CUP rep wrote a blog post about pre-BEA So after a week of reflection, it’s now my turn to report on the events that transpired at the Javits Center.

This was my first ever BEA on the publisher’s side of the booth. For years I traveled up and down the freshly carpeted and backlit booths as a bookseller/buyer in search of the new books coming out for the Fall season. Mostly it was a good chance to visit a lot of publishers that I never encounter on a regular basis, see what big books were coming out, and keep track of the best gift books for the holiday gift guide. Galleys and beverages were a nice treat as well.

Being on the publisher side is a different type of excitement. You get to interact with co-workers and fellow reps as well as providing the catalog for this upcoming season. I must say that Cambridge has an extra special and fetching catalog for this season. We are celebrating our 425th Anniversary next month. So the cover of the catalog is from the original charter of Henry VIII in 1534. Plus, we have some great books that garnered a lot of interest.

The main books that people asked about were The Cambridge Companion to The Beatles , Michelangelo, Technological Medicine, and the soon-to-be released The Third Reich in the Ivory Tower. The Book Expo is also a great chance to interact with many good customers from around the country. On Saturday, I had the ability to interact with Cody Morrison (from Square Books in Oxford, MS), Tom Lowenburg (from Octavia Books in New Orleans, LA), Tom Rider (Goering’s in Gainesville, FL), and Michael Fox (from Joseph Fox Bookshop in Philly, PA).

Even though there were some publishers and booksellers missing, the Book Expo was a success! I mean, Dr. Ruth showed up at our booth. How cool is that!