I remember when, a bushy-tailed 25-year-old, I came to New York and began a job search. Well, back up a bit, I had been searching for a job in NY for 3 months prior to my move, with no success. Waiting tables was out, I had done that already. So I bee-lined for publishing. After all, I have a Master’s Degree. In Philosophy. From Cambridge. I can parse anything; think critically; read fast, and write faster. I’d be a prime employee, right? Well, it took another 8 months before I landed this job at Cambridge; and during that time, I interned, without pay.

This was over 3 years ago, when growth was frantic and Bernie Madoff was still a minor prophet. So here we turn to one of our current interns, reflecting on searching for a job in even tougher times, in an industry seeing greater flux than ever before. What does it feel like now? Any advice from our readers?

It seems as though we did everything right. For the past four years, we toiled incessantly, isolating ourselves in the abyss of libraries for hours, sometimes even days at a time, with nothing more than some cans of Amp energy drink and a few textbooks to keep us company. Sure, we had our fun (college is college after all), but when finals week came around, every last ounce of time and energy was invested in one thing: the assurance that upon receiving that coveted piece of paper come May, our scrupulous efforts would not be in vain. Even so, after the last all-nighter has been pulled, the final beer pong tournament played, and tassels turned over to the left, the vast majority of us are faced with a harsh reality: it is near impossible to find a job these days. This reality is present all across the board as far as industries are concerned, but it is particularly challenging within the field of publishing. As the book business undergoes significant changes, it is difficult to pinpoint exactly what the implications of these changes will be, both for the industry itself and for the recent graduates who seek to become a part of its workforce. 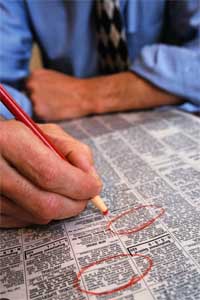 Publishing is an age-old business, and a trade heavily dependent on social change. The Press, as most of us know, was founded over four centuries ago. As literacy became widespread, the need for commercial printers and publishers grew accordingly. As long as there has been formal education, there has been a demand for the means of spreading this knowledge, and as our knowledge has evolved, so has the technology utilized in its circulation. So it comes as no surprise that publishing has gone from papyrus to typewriter to computer, and that in the modern age even traditional print is becoming increasingly web-based. With magazine and newspaper articles now easily accessible online, print media seems to be on the verge of extinction. Trade books and textbooks appear to be in somewhat higher demand, but even this is rapidly changing as the newest technologies replace print at a considerable pace. Amazon’s Kindle provides a compact digital medium to read what were up until now paperback novels, and even university instructors, especially in the scientific disciplines, are beginning to embrace the idea of the total digitalization of textbooks, so that they can be read on hand-held devices. So what does this mean for publishing, and consequently, for those seeking employment in the business, particularly during trying economic times where full-time work is already scarce as it is?

Recruiting new talent to join any industry is dependent on a number of factors, and perhaps the most important is the ability to keep up with the latest trends and advances that pertain to the field. Since we are amidst a great slew of technological transformations in publishing, it would appear most logical right now for companies to hire young graduates to fill entry-level positions. After all, we are a tech-savvy bunch in comparison to our predecessors, and because we don’t possess as much formal work experience as seasoned professionals do, are willing to work for less pay. However, this is surprisingly not the pattern present in today’s workplace. Many employers, in addition to laying off large amounts of workers, are getting rid of entry-level positions altogether and opting instead to place greater responsibility on incumbents with more experience. While this may be an effective quick-fix in the short-term, the enduring results will likely prove impractical for companies and job-seekers alike; a lose-lose situation.

Since we are amidst a great slew of technological transformations in publishing, it would appear most logical right now for companies to hire young graduates to fill entry-level positions.

According to the Department of Labor, the unemployment rate is highest for those in the 20-29 age group, a statistic that has risen considerably within the past year. While there are a lucky few grads who have managed to land positions and get their careers started immediately, most of us are either stuck with minimum-wage jobs normally reserved for high-school kids, or working for free (I myself am in my second summer as an intern here). Though this can be great for a few additional lines on the resumé and/or some pocket cash, it is only a matter of months before little things like student loans and health insurance start creeping up on us, and we are left unsure of how to deal.

Not only does the lack of entry-level positions out there affect us recent graduates; down the line it could potentially hinder the progress of publishing companies. As senior-level employees retire and the industry becomes increasingly innovative and dependent on technology and new media, there will inevitably be a need for people well-versed in these approaches. And who better to call upon than us, the generation of blogging, social networking sites, and an ever-continuing list of Web 2.0 and new media practices?

For now, the best we can do is keep searching for jobs, stay busy and productive in any way possible, and remain confident that things will pick up, and that we will eventually be given the opportunity to contribute to an industry rich in both history and innovation. Hopefully, that day comes sooner rather than later.