Americans love a government out of sight

Writing for the History News Network, Cambridge author Brian Balogh has a history lesson for conservatives and liberals both: Americans have always demanded a more energetic government, even during times considered laissez-faire. 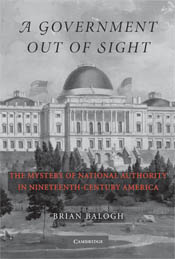 Despite all the talk about bipartisanship, there are not many issues that Democrats and Republicans agree upon these days.  But here’s one:  the kind of do-nothing government we had before government was energetic.

Conservatives and progressives agree that nineteenth-century Americans embraced the free market and the principles of laissez-faire. On this point, they could all use a history lesson.  Americans have consistently demanded more energetic governance, even during the nineteenth century.

For progressives, the emergence of a more powerful national government during the first decade of the twentieth century was a blessing. A remarkably resilient interpretation of American political development, originally crafted by Progressive Era activist historians like Charles Beard, traced the continued growth of national authority, powered largely by bursts of presidentially inspired reform that crested during the twentieth century through the New Deal and the Great Society. These cycles of reform were the key to building a more powerful state. Progressives applaud these developments as a marked departure from minimalist government of the nineteenth century.

Besides grousing about being relegated to decades without snazzy nicknames, conservatives do not dispute this interpretation of modern American politics. They do, however, question the premise that each growth spurt was beneficial for the nation. For them, morning in America shines brightest when the sun illuminates a society organized by the principles of laissez-faire.

Oddly, both conservatives and progressives agree that nineteenth-century Americans embraced the free market. Conservatives want to harness that past; progressives celebrate America’s liberation from it and credit the growth of national administrative capacity for their victories. Neither ideological perspective takes seriously the possibility that Americans turned regularly to the national government throughout the nineteenth century, or that it played a crucial role in shaping what Americans then and now regard as the “natural” market.

But what if the basic historical premise upon which this debate has been waged is fundamentally flawed? What if the historical foundation for both progressive and conservative prescriptions for twenty-first-century public policy – more government/less government – is based on the wrong set of questions? What if modern-day progressives understood that the national government often proved to be most influential when it was least visible? And what if conservatives acknowledged the crucial role that the national government played in shaping both the market and the legal status of corporations that emerged as the key players in that market during the height of laissez-faire? What if the Gilded Age was exceptional? What if it was anomalous precisely because some public officials sought to achieve something that had never been accomplished before – draw a hard and fast line between public and private activity?

Most significantly, what if our understanding of the nineteenth century allowed for the possibility that the United States governed differently from other industrialized contemporaries, but did not necessarily govern less? Existing rules, routines, and structures of power were always in place in nineteenth-century America – even at the national level. And those rules mattered. They influenced the life chances of millions of Americans.

The challenge to those who wish to understand politics today, then, is to discern how these governing patterns operated and to identify the ways in which they endured and evolved.

About the Author: Brian Balogh

Brian Balogh is author of A Government Out of Sight: The Mystery of National Authority in Nineteenth-Century America (2009) and View the Author profile >