In an article in today’s Washington Times, The New White Nationalism in America author Carol Swain comments on Wednesday’s attack on the Holocaust Memorial Museum and on the April Department of Homeland Security report. 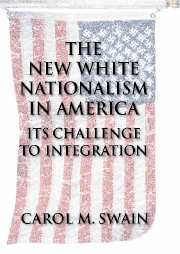 The opinions of several experts contacted by The Washington Times on Wednesday differed when it came to questions about whether membership in such groups are increasing. But all agreed they present a serious threat.

“I am more concerned with the threat from the Christian-identity groups than the homegrown Islamic terrorists,” said Maria Haberfeld, a professor at the John Jay College of Criminal Justice. “It’s a disaster waiting to happen. The fact that this guy did what he did may be symptomatic of things to come.”

Ms. Haberfeld, who teaches a counterterrorism class for New York police officers, said she worries that local law enforcement agencies do not keep close enough tabs on such groups and that the Internet allows them to put forth an extreme rhetoric that advocates violence.

Carol Swain, a law professor at Vanderbilt University and the author of “The New White Nationalism in America,” said that such writings on the Internet can help inspire a so-called “lone wolf,” who is not formally involved with any group, to carry out violent acts.

She said there are conditions in the nation that can lead to an increase in white supremacists, including decreasing white population, increased immigration, fear of minority crime and loss of jobs.

Read the full article at The Washington Times >>

About the Author: Carol Swain

Carol Swain is the author of The New White Nationalism in America: Its Challenge to Integration (2004). Swain is Professor of Political Science and Professor of Law at Vanderbilt University. She is...