The Torture Debate: Disbar the Lawyers? 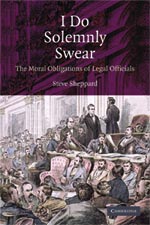 An editorial in the New York Times today calls for the Obama administration to “[move] toward some accountability for the Bush administration lawyers who justified torture.” The lawyers, it says, did not make honest legal opinions, but instead “deliberately contorted the law to justify decisions that had already been made, making them complicit in those decisions.”

Steve Sheppard, author of I Do Solemly Swear: The Moral Obligations of Legal Officials agrees. For Smith, the Oath of the elected or appointed official to uphold the Constitution (violated in this case) is among many tools in place to keep such aberrations at bay. Smith stands explicitly against “retail justice,” arguing that officials have a moral as well as a legal obligation.