Global Crises, Global Solutions author Bjørn Lomborg writes in the Wall Street Journal about the relationships between the climate policy-drivers, and those who stand to benefit from it.

Some businesses see nothing but profits in the green movement.

Some business leaders are cozying up with politicians and scientists to demand swift, drastic action on global warming. This is a new twist on a very old practice: companies using public policy to line their own pockets.

The tight relationship between the groups echoes the relationship among weapons makers, researchers and the U.S. military during the Cold War. President Dwight Eisenhower famously warned about the might of the “military-industrial complex,” cautioning that “the potential for the disastrous rise of misplaced power exists and will persist.” He worried that “there is a recurring temptation to feel that some spectacular and costly action could become the miraculous solution to all current difficulties.” 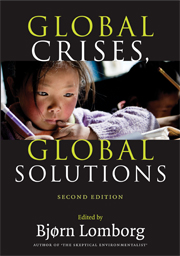 This is certainly true of climate change. We are told that very expensive carbon regulations are the only way to respond to global warming, despite ample evidence that this approach does not pass a basic cost-benefit test. We must ask whether a “climate-industrial complex” is emerging, pressing taxpayers to fork over money to please those who stand to gain.

This phenomenon will be on display at the World Business Summit on Climate Change in Copenhagen this weekend. The organizers — the Copenhagen Climate Council — hope to push political leaders into more drastic promises when they negotiate the Kyoto Protocol’s replacement in December.

The opening keynote address is to be delivered by Al Gore, who actually represents all three groups: He is a politician, a campaigner and the chair of a green private-equity firm invested in products that a climate-scared world would buy.

Naturally, many CEOs are genuinely concerned about global warming. But many of the most vocal stand to profit from carbon regulations. The term used by economists for their behavior is “rent-seeking.”

Even companies that are not heavily engaged in green business stand to gain. European energy companies made tens of billions of euros in the first years of the European Trading System when they received free carbon emission allocations.

Continue reading at the WSJ >>