Richard Bronk in a Nutshell 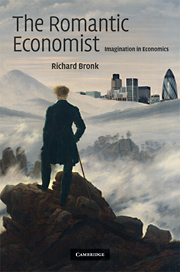 Romantic Economist Richard Bronk is the featured contributor on brainy blog Rorotoko, writing about the limitations of economics, and ways to work through them.

The 2007-9 financial crisis occurred partly because of an intellectual failure to understand the extent to which uncertainty is an inevitable by-product of innovation and the human capacity to imagine new options. New options or novel ideas inject some entirely new elements into the equations of life. There is often no way that you can define all the possible outcomes in advance of innovation or the creation of new products; and innovation implies an important break in previously stable regularities of behaviour. Why this is so important now is that the assumption implicit in many models used by banks before the credit crunch was that uncertainty about the future could be turned into measurable risk on the basis of data (including correlations) trawled from data on the past. And yet this notion that regularities in past behaviour were a safe predictor of future risks was being made at the very moment when the banking industry was innovating furiously.

About the Author: Richard Bronk

Richard Bronk is the author of The Romantic Economist: Imagination in Economics (2009). Bronk spent the first seventeen years of his career working in the City of London, where he gained a wide expertise in internation...