The White Horse at Ebbsfleet

A controversial giant statue of a White Horse by sculptor Max Wallinger is soon to be erected at the Ebbsfleet station in southern England, the UK’s new gateway to continental Europe for Eurostar high-speed trains. Given the contentious debate that has arisen over this new piece of public art, the BBC posed the question to anthropologist Pita Kelekna, author of Cambridge University Press new book The Horse in Human History, “Why a white horse? Where does this symbol come from?” Below is her full answer, with historical tidbits across many cultures. 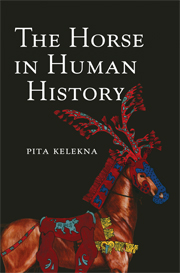 Admittedly, the first image to come to the Western mind is that of Napoleon astride his white horse Marengo traversing the Alps.But throughout history, the horse, as the fastest distance-running animal on earth, has occupied a central sacred place in human society. The Massagetae of the steppes sacrificed the horse to the sun as an offering of “the swiftest of mortal creatures to the swiftest of gods.” In (ancient Indian) Vedic myth and ritual, the horse too was linked with the sun, the white horse representing the primeval force that moves at the speed of light. In the classic Greek world, winged Pegasus, snowy white horse of the dawn goddess Eos, was the heavenly, mythic steed associated with the constellation of stars. With incredible speed he ascended to the seat of the Immortals and lived in the palace of Zeus, for whom he carried thunder and lightning across the skies. From the impact of Pegasus’ hoof on Mount Helicon there arose Hippocrene, the fountain of inspiration of the Muses. Apollo and the Muses of music, poetry, and the arts often rode Pegasus, but no mortal ever dared until the gods bade Bellerophon slay the Chimera.

The white horse played a key role in later religions. In his Great Renunciation, Siddhartha Gautamaset out on his white steed Kanthakato undergo six ears of severe austerities in order to achieve Buddhist enlightenment.Outside Loyang, China, the Han emperor Mingdi in 68 AD constructed the White Horse Temple to honor Buddhist missionaries arriving from the west. In 620, the Prophet Muhammad mounted the winged white horse Buraq (as in, Barack, the American President)on his miraculous Night Journey through the seven levels of heaven to speak with Allah, Moses, and Jesus, thus linking Islam with the two older religions. In medieval England, Saint George battled the dread dragon on a magnificent white steed. And in Mongol equestrian culture, Khubilai khan celebrated each spring a Great Feastin which herds of pure white stallions and mares, all revered as sacred, had free run of the summer palace park at Xanadu. Later in the summer, the khagan performed the ritual horse sacrifice and the scattering of white mare’s milk to the winds as a symbol of Mongol ascendancy over the vast steppes.

At Ebbsfleet station, Max Wallinger’s White Horse stands poised to embark on a new era of high-speed locomotive travel.Its presence reminds us the locomotive was first known as the “Iron Horse.” As international passengers catch a fleeting glimpse of this giant statue, they will know the White Horse embodies man’s ambition for ever more rapid and complex travel.