Law’s Allure author Gordon Silverstein writes in The New Republic that “it’s good for liberals that Sonia Sotomayor is not the standard-bearer that they have been waiting for.” 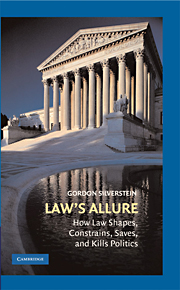 When Sonia Sotomayor’s name surfaced on almost every short-list for Souter’s potential replacement, a very strange thing happened: Some on the left were being just as hard on her as movement conservatives, questioning the judicial prowess of a woman who was at the top of her class at Princeton, an editor of the Yale Law Journal, and then a federal judge for 17 years.

It’s easy to understand why conservatives might try to advance this line–but what explains similar grumbling that could be heard in some leading liberal legal circles? I think the explanation is that some liberal activists fully understood that Sotomayor is not likely to be the standard-bearer for the second coming of the Warren Court for whom they have waited so long–a likely outcome if her nearly two decades as a federal judge and two previous Senate confirmation hearings are any indication. That may not be so good for someone in my business (convincing students that studying Supreme Court opinions and judicial behavior is the key to understanding American politics). But it might, in fact, be a very good thing for the American political system itself.

Let’s be clear: Sotomayor is a liberal judge, having issued many decisions welcomed and applauded by liberals in areas ranging from labor law to the quite recent New Haven Ricci case. But she is a judicial moderate who will fit quite comfortably on the bench with Justices Stephen Breyer and Ruth Bader Ginsburg. Sotomayor has ruled in favor of corporations against their stockholders, voted to support prison officials over their prisoners, testified that Congress has the right to limit and define the jurisdiction of the lower courts, and refused to suppress evidence seized despite a clerical error by the police. She has even issued a passionate defense of the right of a police employee in New York to send “patently offensive, hateful and insulting” racist communications on his own time: The “concerns about race relations in the community,” she wrote in a dissent, cannot and must not “gloss over” three decades of jurisprudence and “the centrality of the first amendment in our lives just because” the government or the court is “confronted with speech it does not like.”

It should not be surprising that 25 Republican senators–including Ted Stevens, Rick Santorum, Jesse Helms, Bill Frist, and Bob Bennett–voted to confirm Sotomayor to the circuit court in 1998. They felt comfortable voting for a judge who actually ruled against a claim of invasion of privacy to order the release of notes that Vince Foster (he of Clinton Whitewater fame) had in his briefcase before he died. Sotomayor also struck down a New York ordinance that banned the display of a religious symbol (a menorah) in a public park. Even corporate lawyers have been lining up over the past two days to announce that she is no threat to corporate interests, having ruled in their favor on numerous occasions.

Read the full article at The New Republic >>

About the Author: Gordon Silverstein

Gordon Silverstein is the author of Law's Allure: How Law Shapes, Constrains, Saves, and Kills Politics (2009). Silverstein is Assistant Professor of Political Science at the University of California, Berkeley. A former journali...