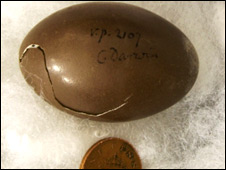 This egg was discovered by a volunteer at Cambridge University’s zoology museum. From the BBC:

It bears a large crack, caused after the great naturalist put it in a box that was too small for it.

The egg is the only one known to exist from Darwin’s Beagle collection.

At one time it was thought there were a dozen or more.

She said: “It was an exhilarating experience. After working on the egg collections for 10 years this was a tremendous thing to happen.”

It was the collections manager, Mathew Lowe, who first realised the importance of the specimen.

“There are so many historical treasures in the collection, Liz did not realise this was a new discovery,” Mr Lowe told BBC News.

“To have rediscovered a Beagle specimen in the 200th year of Darwin’s birth is special enough, but to have evidence that Darwin himself broke it is a wonderful twist.”

Dr Mike Brooke, the museum’s curator of ornithology, traced the specimen’s origin in the notebook of Professor 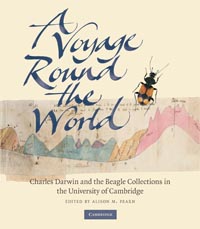 Alfred Newton, a friend of Darwin’s and a professor of zoology in the late 19th Century.

Newton had written: “One egg, received through Frank Darwin, having been sent to me by his father who said he got it at Maldonado (Uruguay) and that it belonged to the Common Tinamou of those parts.

“The great man put it into too small a box and hence its unhappy state.”

Darwin himself mistook the bird for a partridge at first. And in his notebooks from 1833, he wrote that the bird had a “high shrill chirp” and that its flesh was “most delicately white” when cooked.

Mmm… yes. How I would love to travel the world, eating exotic birds!