Congrats to Carmichael’s – PW Bookseller of the Year! 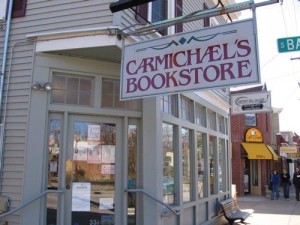 Carmichael’s in Louisville, Kentucky, is Publisher’s Weekly bookseller of the year!

An article in Publisher’s weekly today recounts the many “secrets” to its success, and even caught our own sales rep, Bob Barnett and his wife. They live down the street from Carmichael’s.

On a cold, rainy night in April, more than 60 people drift into Carmichael’s bookstore on Frankfort Avenue in Louisville, Ky., the bookstore owned by Michael Boggs and Carol Besse. They are there for a showing of Paperback Dreams, the PBS documentary about the struggles of Cody’s and Kepler’s, independent bookstores in Northern California. “It’s like that old Joni Mitchell song says—’You don’t know what you’ve got till it’s gone’ ” remarks Besse at the end of the movie.

Among those in the audience that night is Norton sales rep Johanna Hynes, who, along her husband, Bob Barnett, a sales rep for Cambridge University Press, lives a few blocks from the store. “Carmichael’s is the reason I chose to live here in Louisville,” says Hynes in the ensuing discussion about independent retailing, one that featured panelists John Timmons, owner of Louisville’s Ear X-tacy record store, and David Daley, lifestyles editor of the Louisville Courier-Journal.

“I spend most of my time on the road living in Hampton Inns,” continues Hynes. “So when I get home, it’s important to me to walk into a bookstore that isn’t generic, where they know my taste in books, know my family. My son thinks Michael Boggs is a hero. How many five-year-olds have a bookseller as their hero?”