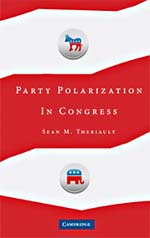 Sean Theriault, author of Party Polarization in Congress offers his analysis on why Specter’s decision to go Democrat is a smart one, and why re-election may be a minor sticking point.

Senator Arlen Specter’s decision to leave the Republican party makes good sense, but not for the reason that the pundits suggest. Everyone is telling us he made the decision out of sheer electoral considerations. In fact, Specter admitted as such in his press conference. Such an assessment, however, belies other more compelling reasons for Specter to switch. I think the early poll numbers in the Republican primary against Pat Toomey were blown out of proportion.

It is true that he has been down by about 20 points, but the primary election is about a year away. If we remember correctly, a year out from the 2008 general election, Hillary Clinton had a lock on the Democratic nomination and John McCain was in the second tier of candidates. As both can attest, a year is a lifetime in politics.

Specter has been in trouble before and he’s pulled it out. As the race became crystallized, smart Republicans would have recognized that Specter is the only Republican that could beat a Democrat in November. In polls a year out from the election, it is easier to send Specter a message reminding him of his Republican ties. In the end, I suspect moderate voters would have come home and Specter would have pulled it out if Specter had continued walking the tight line that he has in the last month or so.

Specter’s switch makes much more sense from a governing perspective. He has been ridiculed for his vote on the stimulus package. Furthermore, while the Senate Republicans have been supportive of him, the Pennsylvania Republicans in the House have decidedly not supported him. For Specter to win next April, he would have had to tie himself in knots over the next year. With this switch, he can remain who he has always been: a moderate pragmatic interested in results rather than ideology.