Archbishop of Canterbury on the Environment

Archbishop of Canterbury Rowan Williams recently made use of Ellen Davis‘ arguments in the Ebor Lecture, the full text of which can be found here. 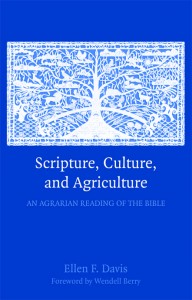 We can’t as humans oblige the environment to follow our agenda in all things, however much we can bend certain natural forces to our will; we can’t control the weather system or the succession of the seasons. The world turns, and the tides move at the drawing of the moon. Human force is incapable of changing any of this. What is before me is a network of relations and interconnections in which the relation to me, or even to us collectively as human beings, is very far from the whole story. I may ignore this, but only at the cost of disaster. And it would be dangerously illusory to imagine that this material environment will adjust itself at all costs so as to maintain our relationship to it. If it is more than us and our relation with it, it can survive us; we are dispensable. But the earth remains the Lord’s.

And this language is used still more pointedly in a passage like Leviticus 25.23: we are foreign and temporary tenants on a soil that belongs to the Lord. We can never possess the land in which we live, so as to do what we like with it. In a brilliant recent monograph, the American Old Testament scholar, Ellen Davis, points out that the twenty fifth chapter of Leviticus is in fact a sustained argument about enslavement and alienation in a number of interconnected contexts. The people and the land alike belong to God – so that ‘ownership’ of a person within God’s chosen community is anomalous in a similar way to ownership of the land. When the Israelite loses family property, he must live alongside members of his family as if he were a resident alien (25.35); but the reader is reminded that in relation to God, the entire community, settled by God of his own gratuitous gift in the land of Canaan, has the same status of resident aliens. And when there is no alternative for the impoverished person but to be sold into slavery, an Israelite buying such a slave must treat them as a hired servant; and if the purchaser is not an Israelite, there is an urgent obligation on the family to see that they are redeemed. Davis points out that the obligation to redeem the enslaved Israelite is connected by way of several verbal echoes with the obligation defined earlier of redeeming, buying back, family land alienated as a result of poverty (vv.24-28). The language of redemption applies both to the land and to the people; both are in God’s hands, and thus the people called to imitate the holiness of God will be seeking to save both persons and property from being alienated for ever from their primary and defining relation to the God of the Exodus (Ellen Davis, Scripture, Culture and Agriculture, ch.5, esp. pp.90-94).

A primary and defining relation: this is the core of a biblical ethic of responsibility for the environment. To understand that we and our environment are alike in the hands of God, so that neither can be possessed absolutely, is to see that the mysteriousness of the interior life of another person and the uncontrollable difference and resistance of the material world are connected. Both demand that we do not regard relationships centred upon us, upon our individual or group agendas, as the determining factor in how we approach persons or things. If, as this whole section of Leviticus assumes, God’s people are called to reflect what God is like, to make God’s holiness visible, then just or good action is action which reflects God’s purpose of liberating persons and environment from possession and the exploitation that comes from it – liberating them in order that their ‘primary and defining relation’ may be realised. Just action, towards people and environment, is letting created reality, both human and non-human, stand before God unhindered by attempts to control and dominate.

It is a rather different reading of the biblical tradition to that often (lazily) assumed to be the orthodoxy of Judaeo-Christian belief. We hear regularly that this tradition authorises the exploitation of the earth through the language in Genesis about ‘having dominion’ over the non-human creation. As has been argued elsewhere, this is a very clumsy reading of what Genesis actually says; but set alongside the Levitical code and (as Ellen Davis argues) many other aspects of the theology of Jewish Scripture, the malign interpretation that has latterly been taken for granted by critics of Judaism and Christianity appears profoundly mistaken. But what remains to be teased out is more about the nature of the human calling to further the ‘redemption’ of persons and world. If liberating action is allowing things and persons to stand before God free from claims to possession, is the responsibility of human agents only to stand back and let natural processes unfold?

In Genesis, humanity is given the task of ‘cultivating’ the garden of Eden: we are not left simply to observe or stand back, but are endowed with the responsibility to preserve and direct the powers of nature.